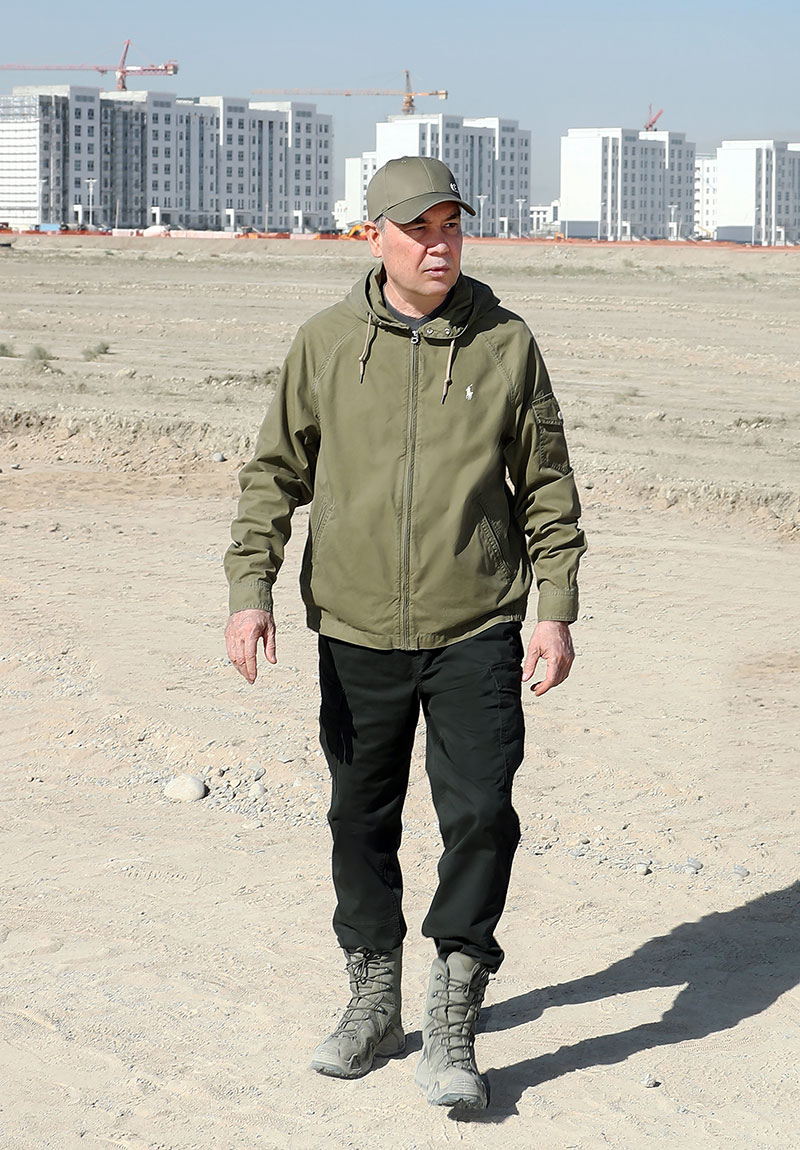 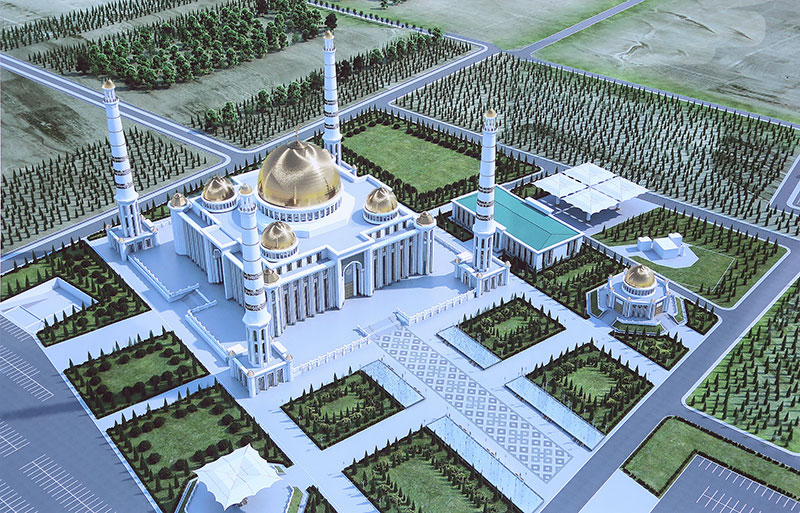 Today, Chairman of the Khalk Maslakhaty of the Milli Gengesh of Turkmenistan Gurbanguly Berdimuhamedov has made a working trip to Akhal region, during which with participation of heads, who supervise construction of the modern administration centre of the region, the place for construction of a mosque was chosen.

In accordance with instructions of the head of the state, Hero Arkadag makes working tips to different parts of the country, learns issues connected with socio-economic development of regions, improvement of social standards of population and outlines areas for their successful solution in places.

At present, the work here continues at a rapid pace. At that, a great significance is given for the high quality of construction and its completion at the due terms.

Chairman of the state committee for construction of the regional centre D.Orazov, khyakim of the new modern city –administration centre of Akhal region Sh.Durdylyev familiarized Arkadag Gurbanguly Berdimuhamedov with projects planned for construction of the mosque, peculiarities of the design as well as drawings of its location.

Turkmen people have always carefully preserved its national traditions and cultural values. Having noted that Islam is an inseparable part of cultural values of our country, Hajji Arkadag having considered projects and drawings of the place for construction of the new mosque, drew attention to necessity of fulfilment of all work, testifying commitment of Turkmen people to noble principles taking into account a growing demand of modernity.

Having pointed out that today the ensuring of freedom of society, free and happy life of people is one of the main areas of the state policy, Arkadag underlined importance that the architectural view of the mosque should be well matched with all new built projects of the new city and adjoining territories should be accomplished at proper level.

In recent years in all regions of the country there have been built modern mosques. Construction for the new mosque on the blessed Turkmen land in Akhal region is another evidence of commitment of people to its age-old traditions and their development taking into account requirements of modernity. Spirituality is attached an important role in education of people on principles of goodness, humanism, nobleness and kind-heartedness, it evokes all the best qualities in people and makes them kind hearted. Therefore, the state attaches proper attention to construction of mosques–temples of spirituality.

Further, Hero Arkadag informed that the representative delegation of our country has recently made a working visit to Japan. In this connection, it was marked that it would be reasonable to use the progressive architectural and constructional experience of Japan, scientific achievements as well as the digital system in construction of the new administration centre of Akhal. An as a whole, it is necessary to apply advanced methods in construction of various projects on the Turkmen land, Arkadag underlined.

The Turkmen people made a great contribution to the development of world culture, including developing national traditions of construction and architecture of our people. At that, special attention was attached to construction of mosques, which were considered abodes of Allah, Arkadag stated.

Speaking of it, Hero Arkadag stated that at present, national traditions of construction find their reflection in the look of Turkmen cities and villages, a great significance is given for them at construction of various projects, including residential houses and mosques. So, age old traditions of people having come down through ages, continue to thrive today as well.

Annually we mark Memorial Day on October 6 and on October 7 in connection with choice of the place for construction of the new mosque, a festive sadaka will be given. In this connection, Hero Arkadag informed on his intention to give a festive sadaka at the expense of his royalties for his works.

At the same time, this event serves an all-round approach to realization of grandiose undertakings, unity and consolidation of our people, successiveness of principles of humanism and spiritual traditions, Hajji Arkadag underlined.

Organization of such events to mark the start of important work has become a noble tradition called to promote their successful implementation.

The principle «State for people!» is a basis of socially oriented state policy and large scale transformations, Chairman of the Khalk Maslakhaty of the Milli Gengesh Gurbanguly Berdimuhamedov underlined and wished heads of construction of the new centre in Akhal region successes in implementation of a large scale work and left the place.