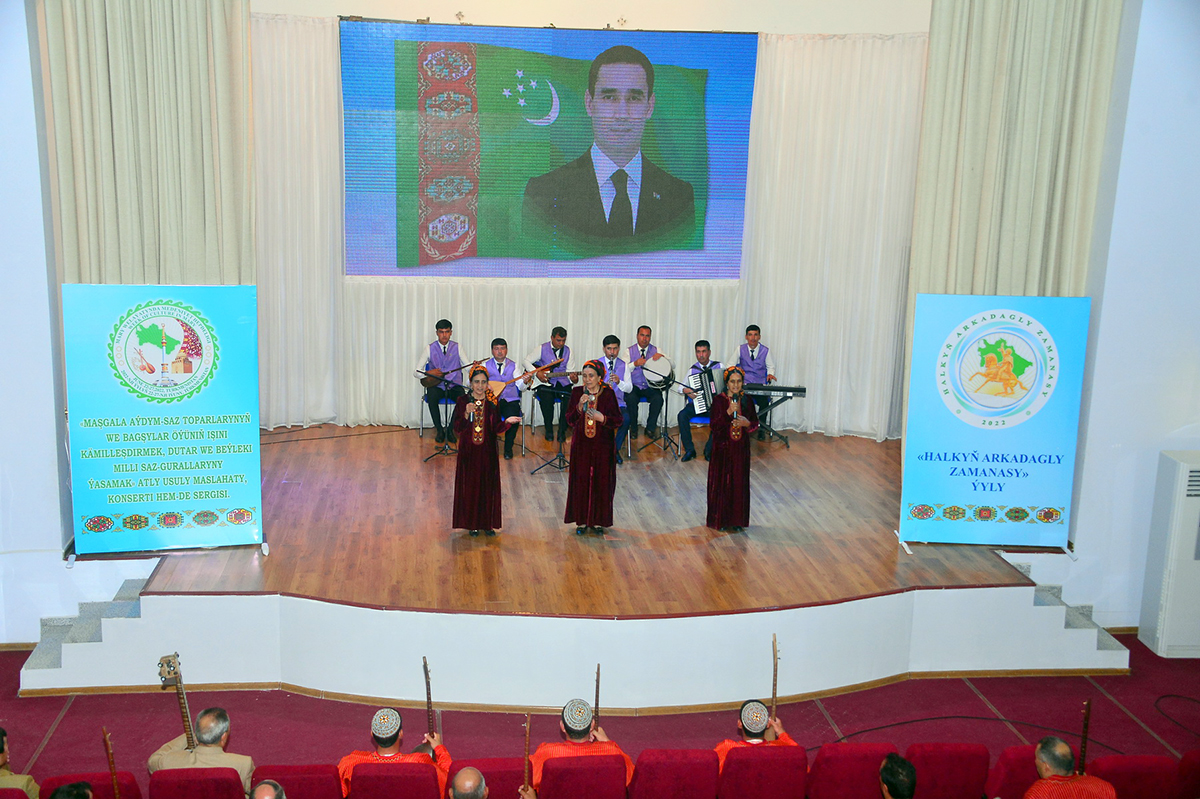 The southern region of the country continues to live in the dynamic rhythm of the grand cultural festival taking place here. The kaleidoscopic diversity of the current program of the creative forum included a number of events - a briefing for media representatives “Young Journalist and the Epoch”, summing up the results of the children's art competition “Journey through Ancient Merv”.

The methodological conference on improving the activities of family musical ensembles and the Bagshy House, making the dutar and other national musical instruments, concerts and exhibitions, the premiere performance of the play “Ylahy yşgyň kyssasy” by the State Drama Theater named after Kemine, Mary Velayat also brought their colors to the bright palette of the Week of Culture.

In the library of Mary velayat, where the exhibition of books and arts and crafts, which is very popular with numerous guests of the city, continues to work these days, a briefing “Young journalist and the Epoch”was held.

Within the framework of the creative forum at the children's art school in the city of Mary, the results of the competition “Journey through Ancient Merv” were summed up.

Ancient Merv is known as the center of our culture and art, the birthplace of true masters. He made a significant contribution to the progress of human civilization.

The above competition is aimed at identifying and encouraging talents among the younger generation, as well as popularizing folk decorative arts and artistic crafts.

In five nominations of the creative competition - painting, graphics, sculpture, ceramics, tapestry - the originality of the idea, aesthetics, and mastery of execution were evaluated.

The works of young masters of brush and canvas of the Mary velayat are very diverse, but all of them are united by an ardent love for the Motherland, its history, native nature and the Turkmen people.

As a result of the competition, the winners were awarded diplomas, letters of thanks and gifts from the Ministry of Culture and the Youth Organization named after Magtymguly.

In the afternoon, within the framework of the Week, a methodological conference was held in the cultural center of the Murgab etrap, Mary velayat.

Before the start of the event, its participants visited the exhibition deployed in the foyer of the building. The exposition includes literature on the theme of song and musical creativity and national musical instruments, such as dutar, gyjak, gopuz, tuyduk and others.

Premieres of performances have become an integral part of the Week of Culture, held annually in different regions of the country. And today, according to the established tradition, the State Drama Theater named after Kemine of the Mary Velayat has prepared a gift for fans of theatrical art - the play “Ylahy yşgyň kyssasy”.

The spectacular and expressive theatrical performance is saturated with a pronounced national flavor, which allows the audience to feel the originality of the Turkmen rituals, and most importantly, to feel one of the ideas of the performance about the need to preserve and increase spiritual values and centuries-old folk traditions - an eternal source of strength and inspiration.

Evidence of the success of the new production of “Ylahy yşgyň kyssasy” was a storm of applause, which the grateful audience awarded the artists.

The program of celebrations dedicated to the Week of Culture was also supplemented by the performance of the play “Magtymguly” at the Main Drama Theater of the country, dedicated to the life and creative path of the great poet and philosopher of the East.

Thereby, the panorama of events of the next day of the Week of Culture visibly reflected the achievements and dynamics of the positive development of the domestic sphere of culture and art, which contribute to the creation of optimal conditions for the further development of the creative potential of society.