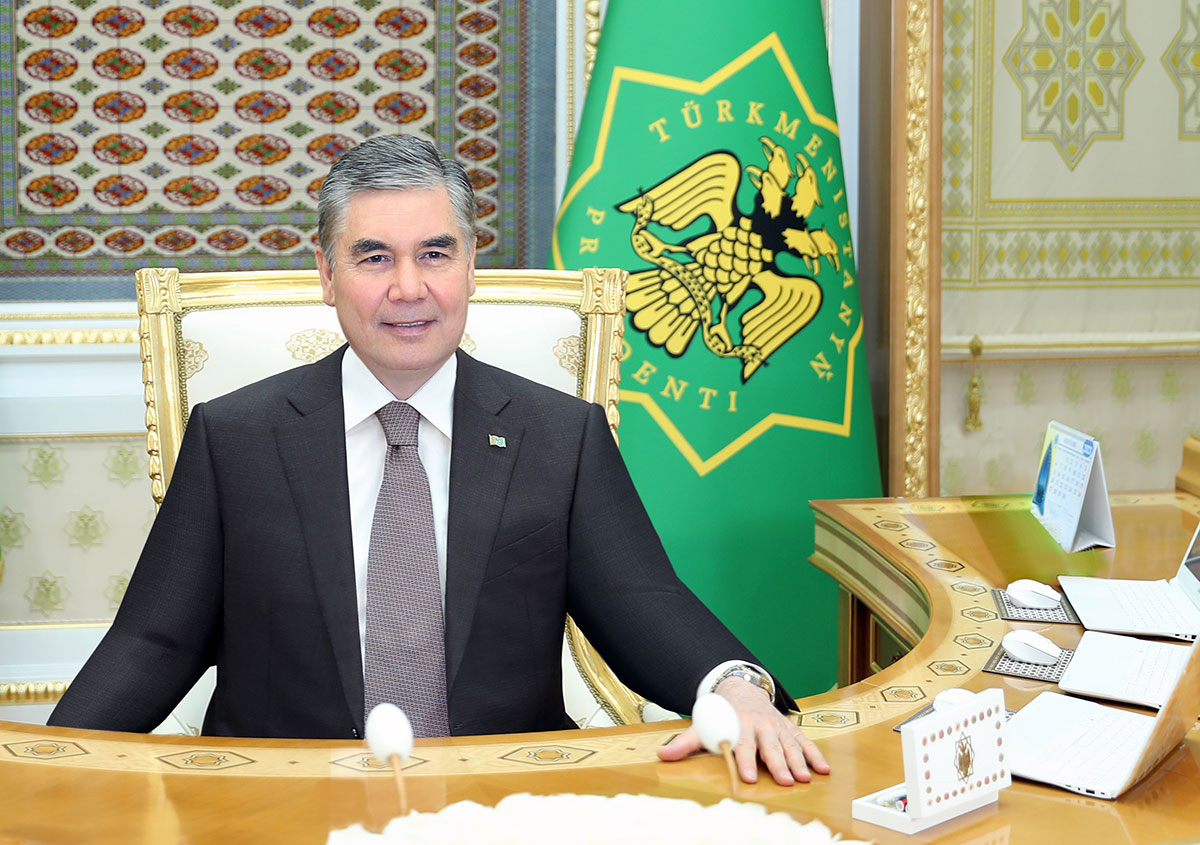 Today President Gurbanguly Berdimuhamedov held the next online meeting of the Cabinet of Ministers in which priority issues of state life were discussed, drafts of a number of documents were considered.

Having announced the agenda, the leader of the nation gave the floor to chairwoman of the Mejlis of the Milli Gengesh of Turkmenistan G. Mammedova who informed on preparation for a meeting of Hulk Maslakhaty in the capital on the occasion of significant date – 30th anniversary of independence of Homeland.

In this direction together with the Mejlis, the Cabinet, the relevant ministries and branch departments, bodies of local government on a systematic basis work on the solution of organizational and other appropriate issues is conducted.

Deputy-chairman of the Cabinet S. Berdimuhamedov reported on the carried-out large-scale work on effective management of the state property, to wide use capacity of the private sector in all branches of economy and to creating favourable conditions for development of small and medium business.

In particular, the Ministry of Finance and Economy together with the ministries, branch departments, and khyakimliks of velayats carried out the analysis of public industries and objects which are subject to denationalization and privatization.

According to the proposals which have arrived for today the corresponding list in accordance with the established procedure considered at the meeting of the Interdepartmental central commission at the Ministry of Finance and Economy was prepared. It included 5 objects of Türkmengaz State Concern, 3 - Türkmenawtoulaglary Agency of Agency of Transport and Communications at the Cabinet, 1 - Türkmenhimiýa State Concern and 1 - khyakimlik of Lebap velayat which are offered to be privatized by means of the competitive auction.

Then deputy -chairman of the Cabinet Sh. Abdrakhmanov reported on the situation in the supervised fuel and energy sector and, in particular, on the work on production of import-substituting production which is carried out by Turkmenbashi oil refineries complex.

As it was noted, on the basis of the application of Türkmenhowaýollary Agency TORC took appropriate measures on production of aviation petrol imported for An-2 planes.

This production was registered by the Main Public Service "Türkmenstandartlary" with the corresponding certificate.

Deputy-chairman of the Cabinet E.Orazgeldiyev reported on preparation for the forthcoming cotton crop.

These days in velayats of the country, along with works on care of cotton, appropriate measures for ensuring organized start of cotton-picking harvest season are realized.

Having heard the report, President Gurbanguly Berdimuhamedov noted that during the prosperous epoch of the powerful state program activities for development of domestic agricultural branch are carried out. From the state all conditions are created in order that farmers could cultivate rich crops of agricultural crops. Production of big crop of raw cotton in Turkmenistan will allow to provide the textile industry with valuable cotton production.

For the organized beginning of cotton-picking campaign President Gurbanguly Berdimuhamedov gave blessing on start of "white" harvest season in Akhal, Balkan, Lebap and Mary velayats on September 8, and in Dashoguz velayat - on September 15, having appealed to honourable elders to give their blessing with words "Bismilla!".

The head of state addressed farmers and all workers of agriculture a wish of good health, family wellbeing, and great success in their large-scale work for further prosperity sovereign country.

Deputy-chairman of the Cabinet Ch. Gylyjov reported on activity of the supervised structures, in particular, in the sphere of trade and foreign economic relations. The realized measures for the state support of small and medium business, expansion of import-substituting and export-oriented productions with involvement of opportunities of the Union of Industrialists and Entrepreneurs became a separate subject of the report.

Deputy -chairwoman of the Cabinet M. Mammedova reported on preparation of the program of cultural actions in honour of the 30th anniversary of sacred independence of Turkmenistan and commissioning of a number of objects in the capital, in particular, of the new Government tribune located along Kopet Dagh Avenue.

The ceremony of its opening is to be held on September 16, the current year. Now works on registration of new object are carried out with active application of the advanced digital technologies. It will allow to give to the festive actions planned to carrying out at the Government tribune, bright colour and to show a celebration of an era of power and happiness. Here on September 27 the main actions dated for the glorious anniversary of independence of Fatherland, including military parade and review of progress and achievements of branches of economy and a social complex will take place.

Then CEO of Agency of Transport and Communications at the Cabinet M. Chakyev reported on drafts of resolutions "On modernization of multiservice network of data Transmission" and "On adoption of provision on preparation and retraining of drivers of vehicles".

It was reported on the carried-out work on modernization of information multiservice network of data transmission, in particular, about purchase, delivery, installation of the corresponding equipment and the software, and also on rendering technical support.

The draft of the Resolution "on adoption of provision on preparation and Retraining of drivers of vehicles" was also submitted to attention of the leader of the nation.

Having signed the presented Resolutions, President Gurbanguly Berdimuhamedov sent them to the head of the Agency by the digital system, having addressed concrete instructions on realization of the tasks designated in them.

Summing up the meeting results, the leader of the nation noted that today a number of topical issues of state life were considered and the documents aimed at the development of branches were accepted.

Finishing the meeting of the Cabinet of Ministers held online, the head of Turkmenistan wished its participants good health and great success in their work for further prosperity of sovereign Fatherland.