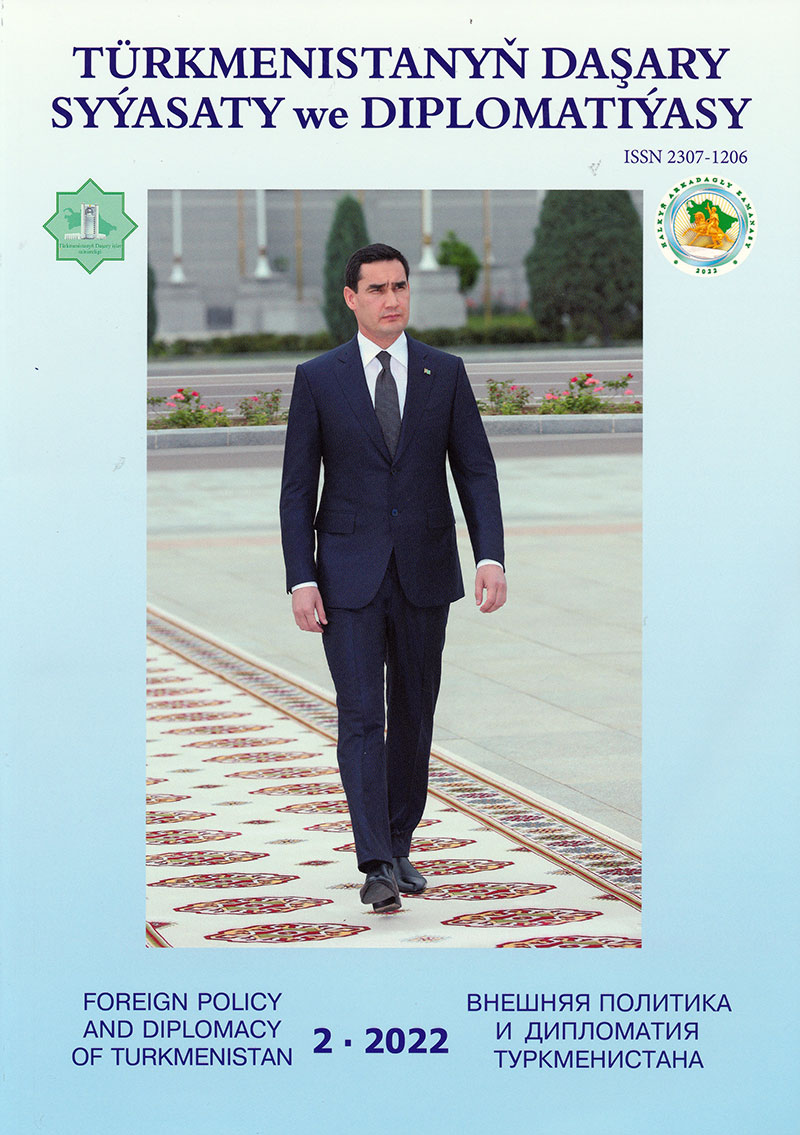 The next issue of the quarterly, scientific-practical magazine «Foreign policy and diplomacy of Turkmenistan» published by the Ministry of Foreign Affairs, has been released out of print. Materials published on its pages familiarize a wide range of readers with main areas of foreign policy of our country based on principles of positive neutrality, peace loving, good neighbourhood and constructive cooperation.

The issue opens with the speech of the President of Turkmenistan made at the Asian-Pacific Water Summit on April 23, 2022. At the invitation of the Prime Minister of Japan, the head of the state took part online in that high-level forum.

So, a number of publications are devoted to official visits of President Serdar Berdimuhamedov to the Russian Federation and the Islamic Republic of Iran as well as to the state visit of the head of Turkmenistan to the Republic of Uzbekistan. Agreements concluded and a solid pack of documents signed to promote further all-round development of traditional friendly relations between our countries and peoples, mutually beneficial cooperation in a wide range of areas attests to the high results of high-level talks held in Moscow, Teheran and Tashkent as well as bilateral meetings of state officials and business circles.

The meeting of the President of Turkmenistan with the Prime Minister of Georgia, who visited Ashgabat in July at the head of the delegation of his country became the topic of one of the articles. During the meeting an exchange of opinions of priority issues of the Turkmen-Georgian interaction, a reliable basis for which to reach qualitatively a new level was laid by agreements made at high level in recent years, took place.

Within the framework of the visit of the Prime Minster of Georgia, talks between delegations of the two countries were also held and by their outcome, a number of documents called to give a new impulse for interstate cooperation were signed.

Being committed to the equal and respectful dialogue with all interested foreign partners, Turkmenistan strives to use the available potential for development of fruitful cooperation in bilateral and multilateral formats. It finds its reflection in the active and initiative position of our country in issues of interaction on the Caspian Sea. So, on June 29, Ashgabat hosted the Sixth Caspian Summit for participation in which Presidents of the Republic of Azerbaijan, Islamic Republic of Iran, Republic of Kazakhstan and Russian Federation arrived in the Turkmen capital.

Displaying a systematic approach to issues of regional and interregional cooperation, Turkmenistan attaches the great attention to the deepening of constructive interaction with Central Asian countries, with peoples of which the Turkmen people enjoy historical ties of friendship, good neighbourhood, and common cultural and spiritual values. The topic of the next article of the magazine became participation of President Serdar Berdimuhamedov in the Fourth Consultative Meeting of the heads of states of Central Asian countries held on July 21 in Cholpon-Ata (Republic of Kyrgyzstan).

Within the framework of his visit made for this purpose the head of Turkmenistan also held a meeting with the President of the Republic of Kyrgyzstan. During the talks with participation of members of government delegations of both countries, a wide range of issues of Turkmen-Kyrgyz cooperation were discussed in the light of realization of earlier potential and perspective agreements.

The publication «Ashgabat format- a new form of inter-parliamentary cooperation» was devoted to two significant events of the second quarter of the current years- the Inter-Parliamentary Forum and the Dialogue of Women of the States of Central Asia and the Russian Federation, initiation of whose organization belongs to Chairman of the Khalk Maslakhaty of the Milli Gengesh of Turkmenistan Gurbanguly Berdimuhamedov. These important multilateral meetings displayed efficiency and a great potential of the given format of interaction, which is more required in the modern world today.

It is noted that results of the work of the Inter-Parliamentary Forum of the States of Central Asia and the Russian Federation found their reflection in signed bilateral documents as well as in the Ashgabat Declaration.

Articles by foreign and local authors devoted to relations between Turkmenistan and friendly countries, which include the Republic of Uzbekistan, Kingdom of Saudi Arabia, Republic of Armenia as well as to the Sixth Caspian Summit, peace loving neutral policy of our country, inter-parliamentary cooperation, and the role of women in social, political, and socio-economic development are also of interest for readers.

Events of the second quarter of 2022 are highlighted in the consecutive order under the traditional heading «Chronicle of diplomatic life». They include online and offline bilateral meetings, talks, inter-foreign department consultations, participation of delegations of MFA of Turkmenistan in forums held by important regional and intentional organizations and others. The issue ends with the chronology of the selected relevant documents.

Thus, the content of the next issue of the magazine published in Turkmen, English and Russian languages highlights key priorities, main goals and objectives of foreign policy of our independent neutral fatherland realized under the leadership of President Serdar Berdimuhamedov in the Revival of the New Epoch of the Powerful State.