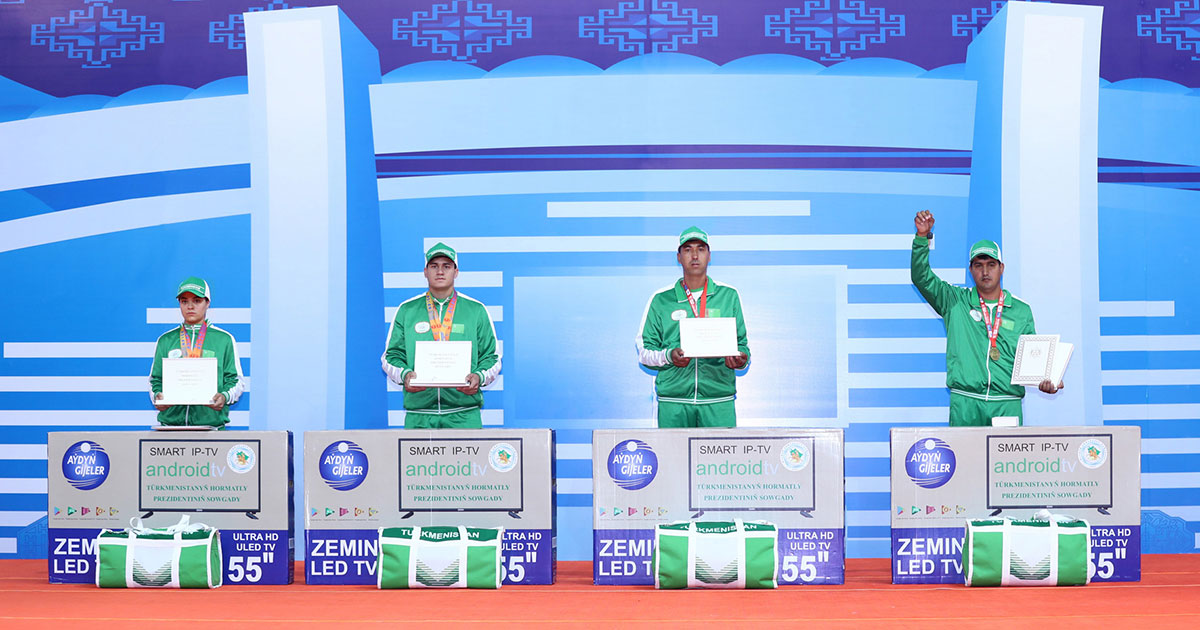 Today, on behalf of President Serdar Berdimuhamedov, a ceremony was held in the Avaza National Tourist Zone to honor athletes who won prizes in recent major international competitions - “the Silk Way-2022” rally-raid held in the Russian Federation, and the Asian Weightlifting Championship among juniors and youth, which took place last month in the capital of the Republic of Uzbekistan - the city of Tashkent.

Members of the Government, representatives of the Halk Maslahaty and the Mejlis of the Milli Gengesh, ministries and departments, public organizations, and the media took part in the solemn event, held in the sports games building of the Avaza sports complex.

A clear confirmation of this is the numerous awards presented at the exhibition located in the lobby of the building, which has become a kind of “mirror” of the achievements of sovereign Turkmenistan in the field of sports.

Of particular importance for improving the skills of domestic athletes and the formation of Turkmenistan as the largest sports power were significant international competitions - the V Asian Indoor and Martial Arts Games held in 2017 with great success, “the Amul-Hazar” International Rally in 2018, the route, which ran along the route of the historical Great Silk Road, and the World Weightlifting Championship.

The participants listened with great attention to the welcoming address of President Serdar Berdimuhamedov, who addressed his congratulations to the members of the national teams of Turkmenistan on their successful performance at international competitions.

Remind that our athletes adequately represented Turkmenistan at the Asian Youth Weightlifting Championship, held in the capital of neighboring Uzbekistan - the city of Tashkent from July 15 to 25 and brought together over 260 athletes from 21 countries.

A member of the Turkmenistan weightlifting team, a student of the 10th grade of the Ashgabat secondary school № 104 Amanova Medine, performing in the 64 kg weight category among teenage girls (juniors) from Uzbekistan, Kazakhstan, India, the Republic of Korea, Thailand, the Kingdom of Bahrain, successfully outperformed her competitors and won three gold medals. In the competition among young girls in the 64 kg weight category, she also won two bronze medals.

Another talented athlete, a member of the national team of Turkmenistan in weightlifting, a student of the 11th grade of the Ashgabat secondary school № 20 Muhyyev Saparly, speaking among juniors from Uzbekistan, Kyrgyzstan, Iraq, the Republic of Korea, the Kingdom of Bahrain, the Kingdom of Saudi Arabia in the weight category of 89 kg, climbed the highest step of the podium. As a result of his performances, the young Turkmen weightlifter won a total of three medals of the highest standard.

Our country was also adequately represented in the “Silk Way 2022”International Rally Raid, one of the main racing events of this year, which took place on July 6–16 across the territory of the European part of Russia.

32 crews from different countries, including the Russian Federation, the Republic of Belarus, Kazakhstan, Bulgaria, Latvia, the People's Republic of China, Mongolia, took part in the current rally marathon, the route of which was laid along the most difficult and interesting route Astrakhan-Moscow.

Starting from Astrakhan, the participants covered a distance of 4463 kilometers. Most of the route passed off-road: high-speed steppe sections, sandstones and dunes, difficult mountainous and wooded sections. Summing up the results of the 10-day rally and the presentation of awards took place in Moscow, at the “Luzhniki” stadium.

The national motorsport team of Turkmenistan has achieved success in the T2 category. The first place, “gold” and the corresponding Cup were awarded to the representative of the agency “Turkmenawtoulaglary” Toylyyev Merdan and his navigator Toylyyev Shohrat, who performed in the car “Nissan Patrol” under the number “233”.

In a solemn atmosphere, Deputy Chairman of the Cabinet of Ministers N. Amannepesov, on behalf of the head of state, to the thunderous applause of the assembled athletes, presents the keys to the car, valuable gifts, vacation packages in the Avaza National Tourist Zone, as well as from the Charitable Foundation for Assistance children in need of care named after Gurbanguly Berdimuhamedov - special equipment. The Deputy Prime Minister expressed confidence that they would raise the green banner of our Motherland more than once at major international tournaments.

On behalf of the head of state, the athletes of the national motorsport team of Turkmenistan were presented with a “Nissan Pathfinder” car.

Expressing sincere gratitude to the head of state and the Hero-Arkadag for their constant concern for promoting sports and a healthy lifestyle, creating conditions in the country for practicing various sports and achieving new outstanding sports victories, the participants of the celebration, who received state awards, wished President Serdar Berdimuhamedov good health, happiness and success in large-scale political activities for the benefit of the native people and the Fatherland.

Having dressed in new, specially prepared sports suits that meet the standards of modern motorsport, the awardees got behind the wheel of a car donated on behalf of Arkadaglu Serdar, drove through the territory of the Avaza Scientific and Technical Recreation Center and headed along the route of the “Amul-Hazar” International Rally held in 2018 year at the initiative of the Hero-Arkadag.

In 2018, the International rally along the route “Amul-Hazar” was held in Turkmenistan, in which, as you know, Hero-Arkadag took a personal part. According to the rules of motor sports, special attention is paid to the technical condition of racing cars. Then the Hero-Arkadag, together with Arkadagly Serdar, examined the car intended for participation in the competition.

Hero-Arkadag Gurbanguly Berdimuhamedov noted that the main requirement for a sports car is its safety, that is, strength, reliability, from the seat to the instruments. There are a lot of practical nuances, knowing which, an experienced racer can best prepare the car for such a serious test as a rally.

Hero-Arkadag and Arkadagly Serdar checked the engine, wheels and replaced a number of parts, then examined the units of the chassis of the car on the overpass and made sure of their strength. We see such a responsible approach to any business, to the solution of each task, including the successful holding of sports competitions.

Taking into account the difficult conditions of the route, Hero-Arkadag and Arkadagly Serdar paid special attention to the optimal level of readiness of the transport, its strength and power.

Then, in order to test the car reassembled on the basis of his drawings, the Hero-Arkadag got behind the wheel, and Arkadagly Serdar took the place of the navigator. From here a course was taken towards the Karakum. Hero-Arkadag, driving a powerful machine at high speed, quickly overcame a difficult distance.

In honor of today's significant event, a concert of masters of culture and arts was organized, as well as demonstration performances by athletes in various sports.

Today, the ceremony of presenting valuable gifts on behalf of Arkadagly Serdar to the athletes who took part in international competitions and won 2, 3 prizes took place.

This event, held with the participation of masters of motor sports, leaders and representatives of the Ministry of Sports and Youth Policy, public organizations, honorary elders and youth, became a clear evidence of the attention paid to the development of high performance sports in Turkmenistan, recognized as a country of health and high spirit.

Athletes awarded on behalf of the President of the country assured that they would make every effort to further increase the authority of Turkmen sports around the world.

In conclusion, the participants of the celebration expressed their sincere gratitude to Arkadagly Serdar for his constant concern for the establishment of the principles of a healthy lifestyle, as well as for the development of mass physical culture and sports of the highest achievements in the country.