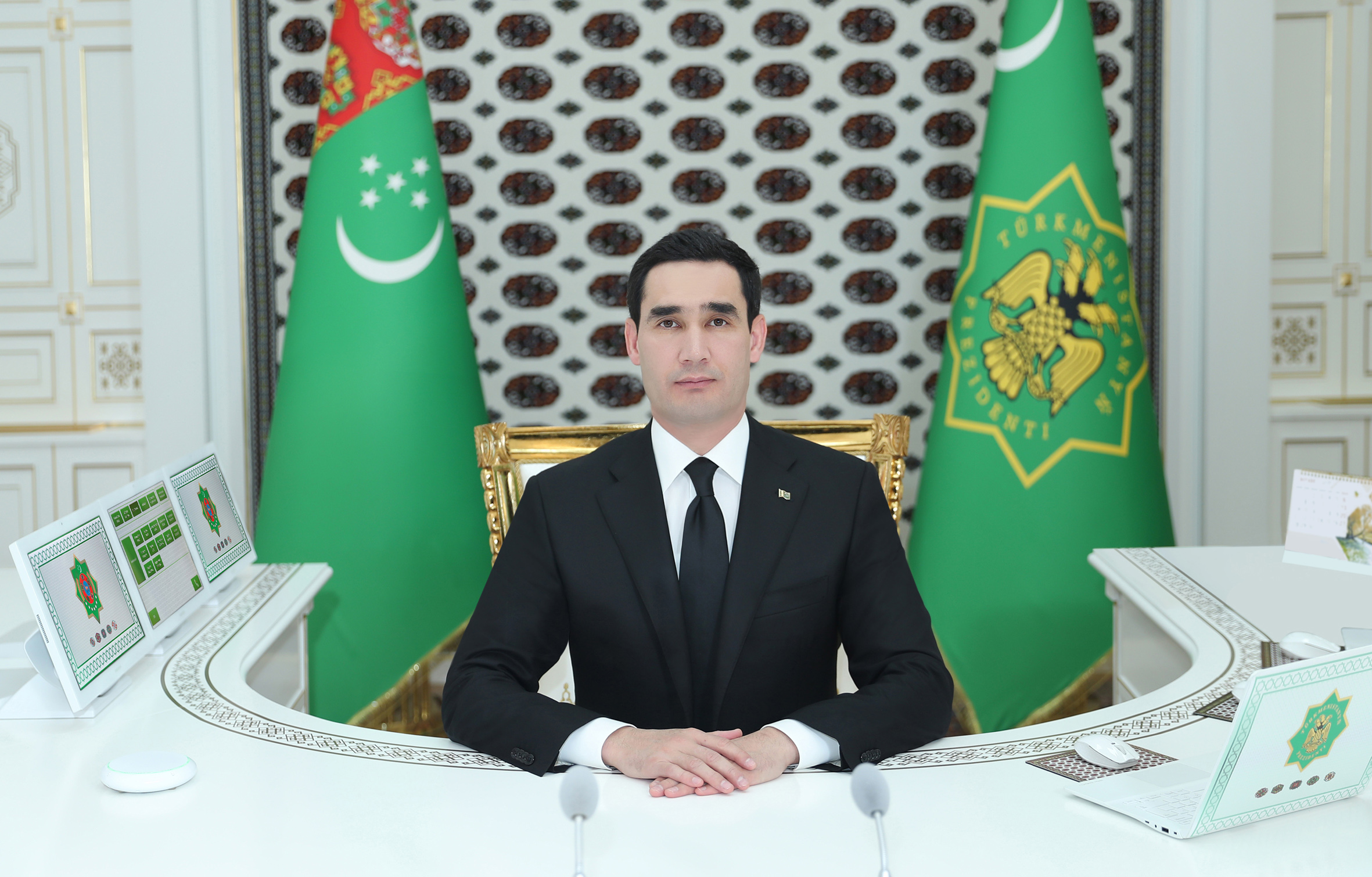 Today, President Serdar Berdimuhamedov held a working meeting via the digital system with the participation of Deputy Chairman of the Cabinet of Ministers A. Yazmyradov, who is in charge of the agro-industrial complex, and hyakims of the velayats, during which the dynamics of seasonal work performed in the regions of the country and issues of development of the agricultural sector were considered.

First, the floor was given to the Hyakim of Akhal Velayat Ya. Gurbanov, who reported on the pace of field campaigns, including the harvesting of “white gold”, as well as preparations for the celebrations dedicated to the International Day of Neutrality.

After listening to the report, President Serdar Berdimuhamedov noted that the actual requirement of the day is the collection of the grown cotton crop without losses, which is the main raw material for the country's textile industry, and ordered that the land be optimally plowed for next year's cotton.

Hyakim of the Balkan Velayat T. Atahalliyev spoke next, who reported on the progress of seasonal work on agricultural land in the western region, the implementation of measures provided for by the Program for the country's socio-economic development in 2022-2028 and the National Rural Program, as well as preparations for the celebration of the International Day of Neutrality.

After listening to the report, President Serdar Berdimuhamedov focused on the importance of carrying out seasonal field work at the proper level, harvesting “white gold” to the last box, plowing land for next year's cotton crop, caring for wheat crops in accordance with agrotechnical standards and effectively using machinery and equipment addressing the hyakim with specific instructions.

The working meeting via the digital system continued with the report of the hyakim of the Dashoguz velayat N. Nazarmyradov on the progress of seasonal field campaigns in the northern region of the country.

After listening to the report, President Serdar Berdimuhamedov emphasized that great importance is attached to the development of agriculture in our country, and focused on the need for careful cotton harvesting and plowing of the vacated lands for next year's sowing in accordance with the plan, giving the hyakim specific instructions on this matter.

Hyakim of the Lebap velayat Sh. Amangeldiev reported on the course of agricultural campaigns and preparations for the celebration of the International Day of Neutrality.

As reported, efforts are being made in the region to harvest “white gold” to the last box, preparing land for the 2023 cotton harvest.

The hyakim reported that the sowing of wheat has been completed in the velayat and the crops are being cared for in accordance with the norms of agricultural technology.

The head of state ordered to keep under control the collection of grown crops of various agricultural crops, instructing the hyakim to complete all work in the shortest possible time and at a high level, which will allow to provide the population with food in abundance.

Then the hyakim of the Mary velayat D. Annaberdiev reported on the progress of seasonal agricultural work, as well as preparations for the International Day of Neutrality.

Necessary measures are being taken to harvest the “white gold” to the last box, plowing the fields for next year's cotton harvest.

Currently, wheat fields are being cared for in accordance with agrotechnical standards, and agricultural machinery and equipment are being used uninterruptedly.

The head of state ordered to keep under control the implementation of the work planned in the velayat this year in accordance with the adopted programs of the country's socio-economic development.

Then Deputy Prime Minister A. Yazmyradov reported on the course of seasonal agricultural campaigns in the regions of the country.

As noted, organized work continues these days to harvest cotton without losses, plowing land for the 2023 harvest. Currently, wheat fields are being cared for in accordance with agricultural standards.

The Deputy Prime Minister reported on the results of the regular meeting of the Intergovernmental Coordinating Water Commission of the International Fund for Saving the Aral Sea, which was held in Ashgabat on November 22 this year in accordance with the plan agreed with the State Committee for Water Management of Turkmenistan.

Summing up the report, President Serdar Berdimuhamedov emphasized the importance of successfully solving the tasks set for the agro-industrial complex, as well as carrying out seasonal agricultural work in accordance with agricultural standards and with high quality.

Focusing on the issue of rational use of water resources, effective application of advanced world experience and the latest achievements, the head of state addressed the vice-premier with instructions on this matter.

Concluding the working meeting on the digital system, President Serdar Berdimuhamedov wished its participants good health, success in large-scale activities aimed at ensuring the well-being of the Motherland and the happy life of the people.