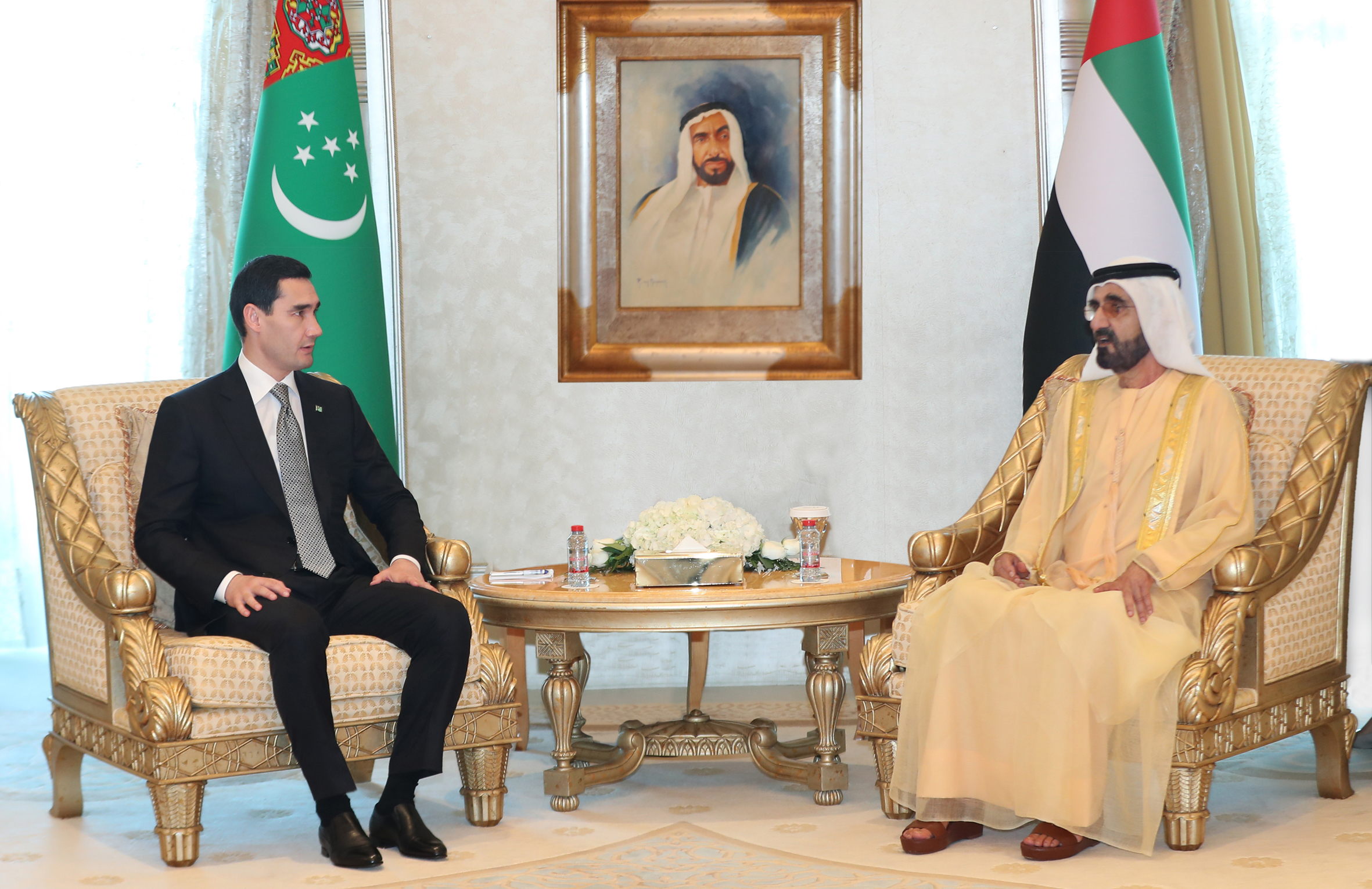 Expressing sincere gratitude for the warm welcome, the head of the Turkmen state conveyed warm greetings from the Chairman of the Halk Maslakhaty of the Milli Gengesh Gurbanguly Berdimuhamedov to the Vice President, Prime Minister of the UAE.

Welcoming the distinguished guest cordially, Sheikh Mohammed Bin Rashid Al Maktoum emphasized that the current visit of the head of Turkmenistan is regarded in his country as an important step towards strengthening the friendship of our fraternal peoples, a new page in the history of interstate dialogue. At the same time, Arkadag Gurbanguly Berdimuhamedov, who had visited the UAE several times before, was particularly noted for his contribution to the development of bilateral relations. As it was highlighted, the United Arab Emirates is very enthusiastic about Turkmenistan’s achievements on the path of progressive transformations and reforms currently being implemented under the leadership of President Serdar Berdimuhamedov.

Thanking for the kind words, President Serdar Berdimuhamedov noted with satisfaction that the traditionally friendly relations between our country and the United Arab Emirates are steadily developing, characterized by a high level of mutual understanding and close cooperation.

During the meeting, the sides exchanged views on the prospects for further strengthening interstate ties based on the principles of mutual respect and support, as well as on some international and regional issues.

It was noted that the entire practice of long-term trust-based partnership serves as an indicator of the goodwill of the two countries, demonstrating a common desire to bring traditional cooperation in the political, trade, economic, cultural and humanitarian spheres to a qualitatively new level.

Taking this opportunity, President Serdar Berdimuhamedov invited Sheikh Mohammed Bin Rashid Al Maktoum to pay an official visit to Ashgabat at a time convenient for him. This invitation was gratefully accepted.

Accentuating the huge potential for mutually beneficial trade and economic cooperation, the head of the Turkmen state noted that the United Arab Emirates, thanks to its huge successes and achievements in various spheres, has become widely known in the world.

As noted, the positive nature of the Turkmen-Emirati high-level dialogue is largely due to the tireless efforts of the leadership of both countries. Speaking in favor of actively building up mutually beneficial trade and economic cooperation, stimulating close business ties, the interlocutors stressed the importance of Arkadag Gurbanguly Berdimuhamedov’s participation in the opening ceremony of the National Day of Turkmenistan at the World Exhibition EXPO 2020 during a working visit to the UAE in October 2021. The Vice President, Prime Minister of the United Arab Emirates highly appreciated the pavilion of Turkmenistan, recognized as one of the best at this global show.

During the meeting, having discussed the state and ways of expanding productive partnership, the interlocutors expressed a common desire to bring traditional cooperation to a qualitatively new level that meets the existing enormous potential. In particular, emphasis was placed on the planned opening of a specialized store selling Turkmen carpets in Dubai (UAE).

As the President of Turkmenistan noted, another important tool in the development of trade and economic relations between the two countries is the establishment of ties between entrepreneurs. In this context, it was emphasized that a business forum on cooperation between the Chamber of Commerce and Industry of Turkmenistan and the Federation of Chambers of Commerce and Industry of the United Arab Emirates will be held within the framework of the current visit.

The fuel and energy potential of our countries, their advantageous location at world trade and transport and communication intersections open up opportunities for further expansion of partnership, the head of state said.

Great importance is also attached to cultural and humanitarian ties, their deepening and expansion in such important areas as science, education, culture and art.

The Vice President, Prime Minister, Minister of Defense of the United Arab Emirates, Ruler of the Emirate of Dubai presented a book about his life and activities to the head of Turkmenistan.

At the end of the meeting, President Serdar Berdimuhamedov and Sheikh Mohammed Bin Rashid Al Maktoum, once again noting high level of fraternal relations, established between Turkmenistan and the UAE and mutual readiness for their further activation, expressed confidence that the traditional bilateral cooperation will continue to strengthen and successfully develop on a mutually beneficial long-term basis, being filled with new concrete content.

Last news
Sport
There is the first medal in the team of Turkmenistan at the World Kurash Championship in India!
Economy
Petroleum products and textiles were in the lead at the SCRMET auctions
Sport
Turkmen masters of Thai boxing won five medals at the international tournament in Turkey
Politics
Following the course of development of Turkmen-Korean relations
Politics
The meeting of the Cabinet of Ministers of Turkmenistan
Official
The head of the state signed a number of documents