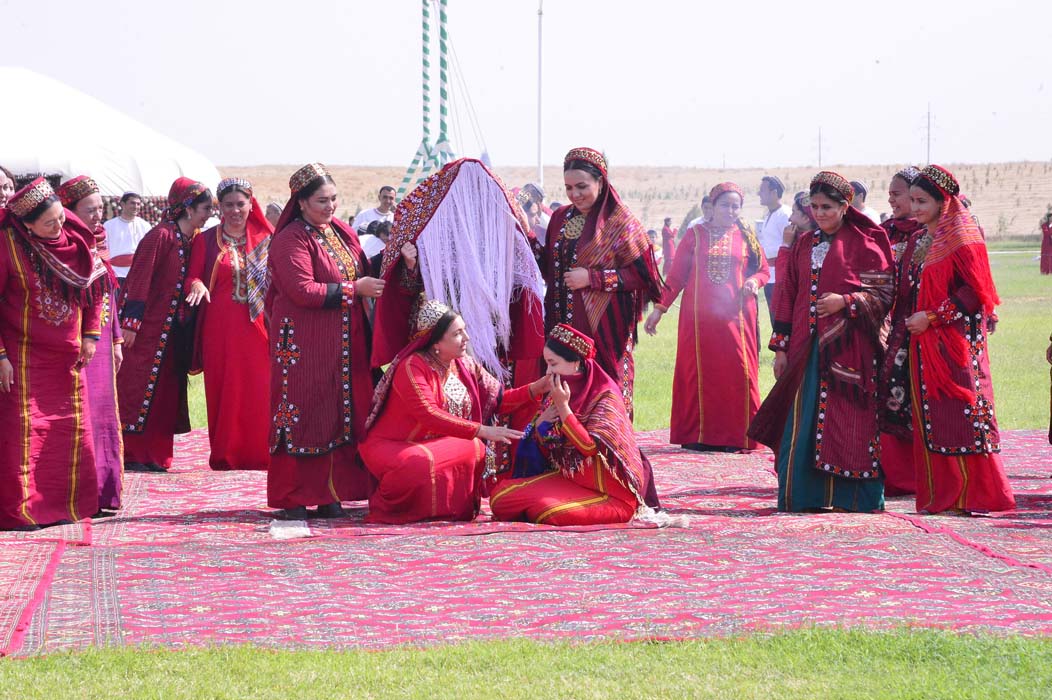 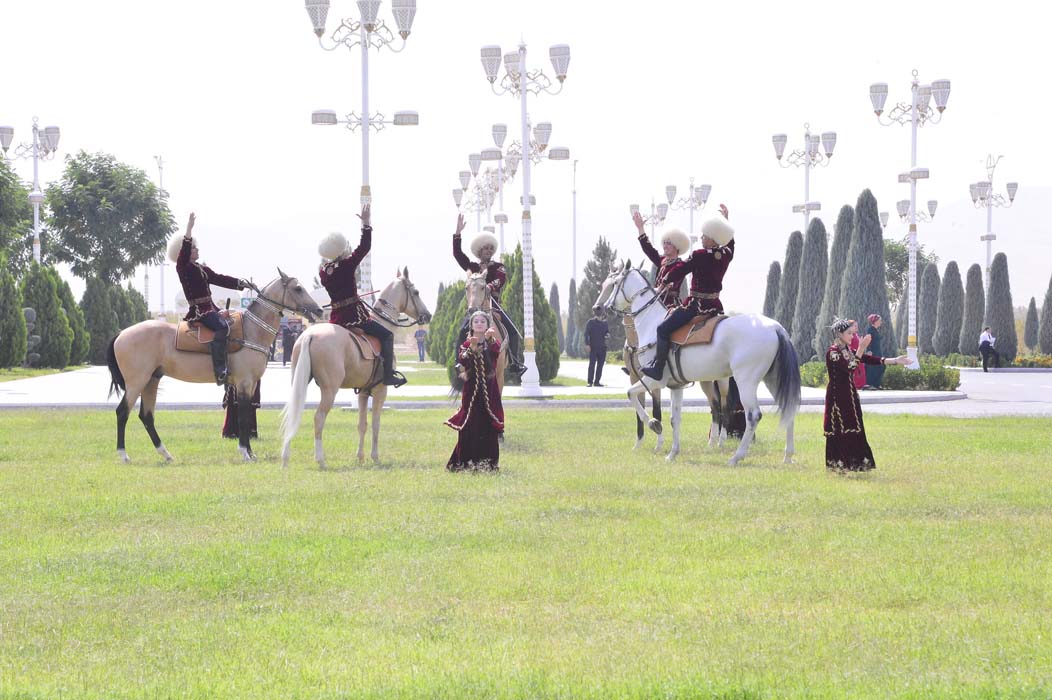 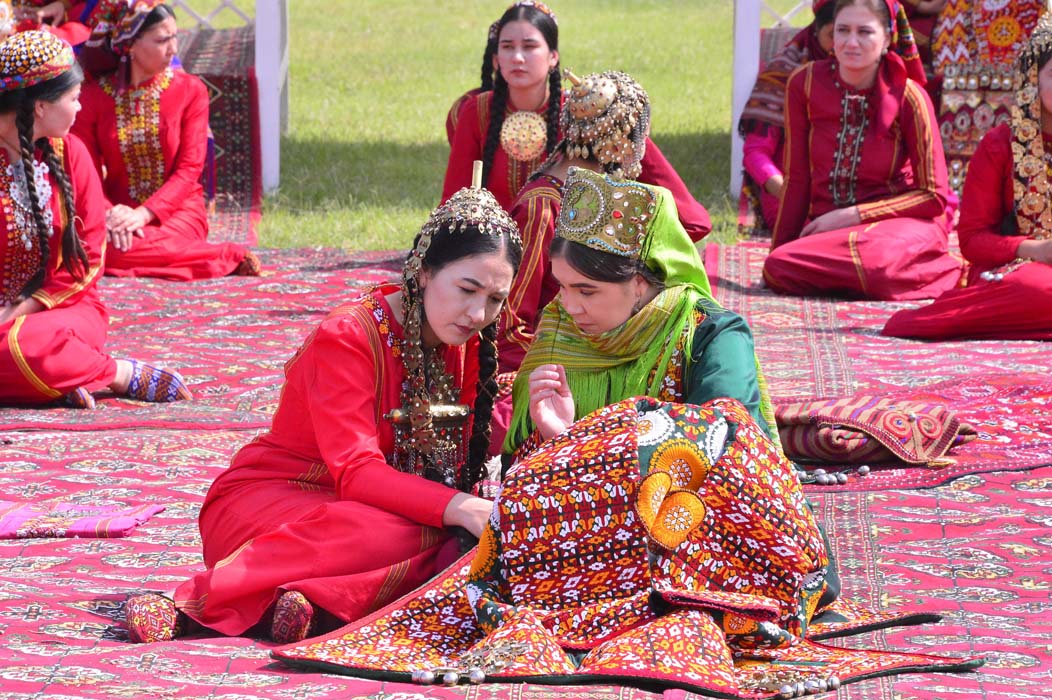 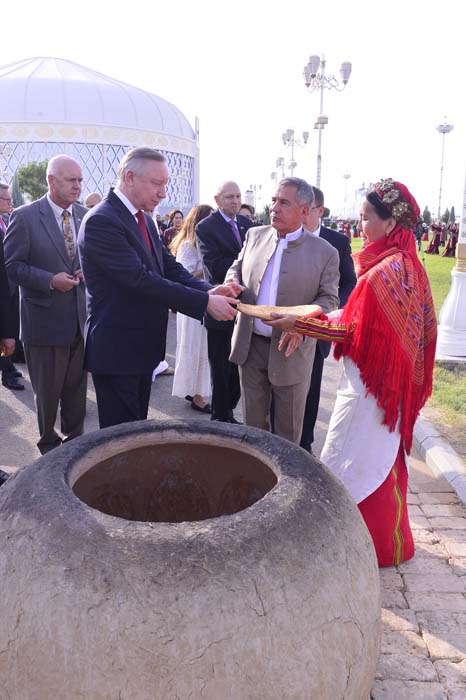 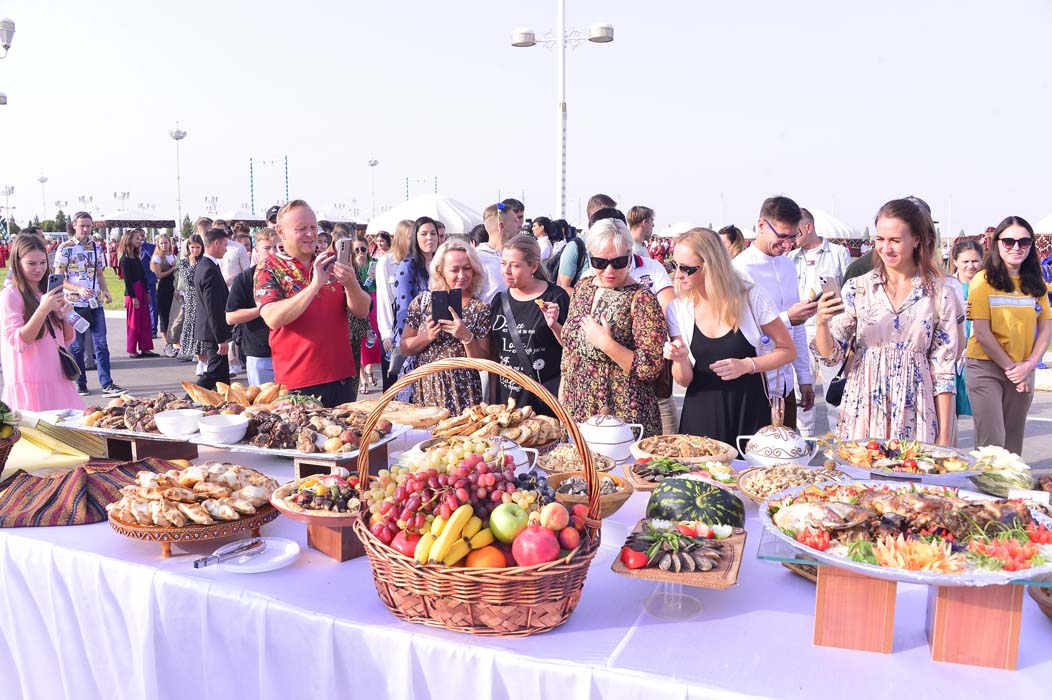 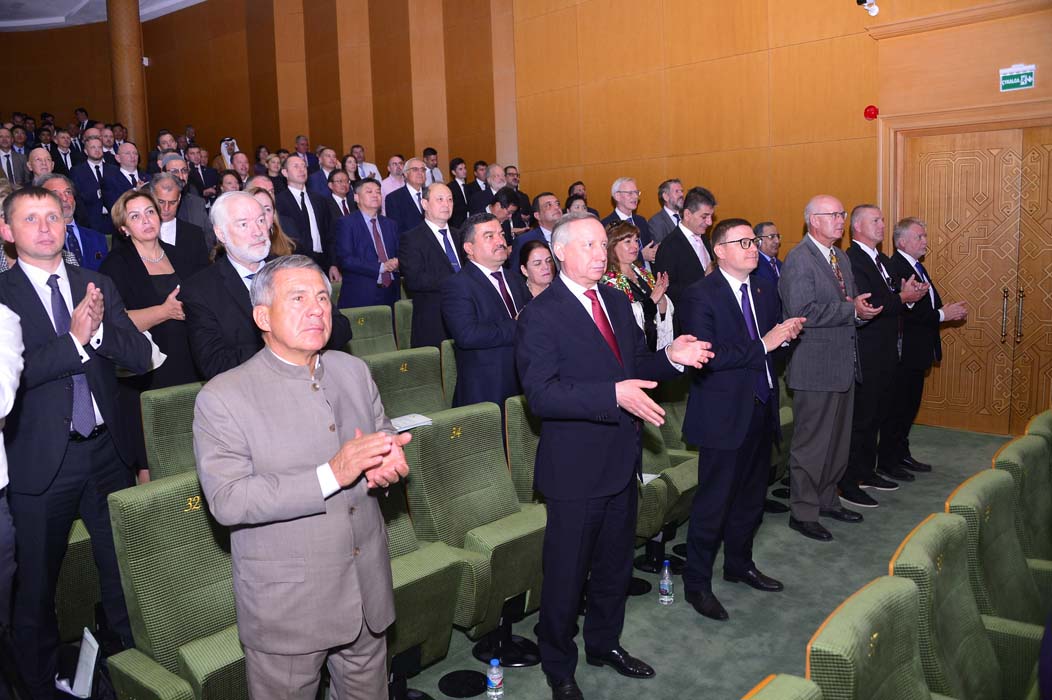 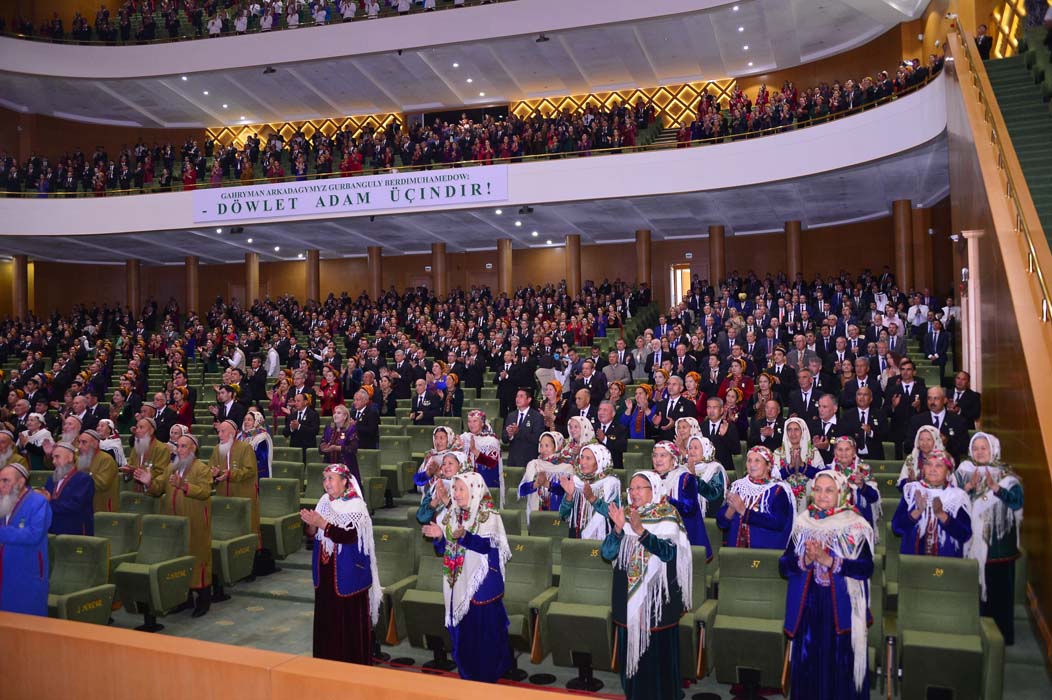 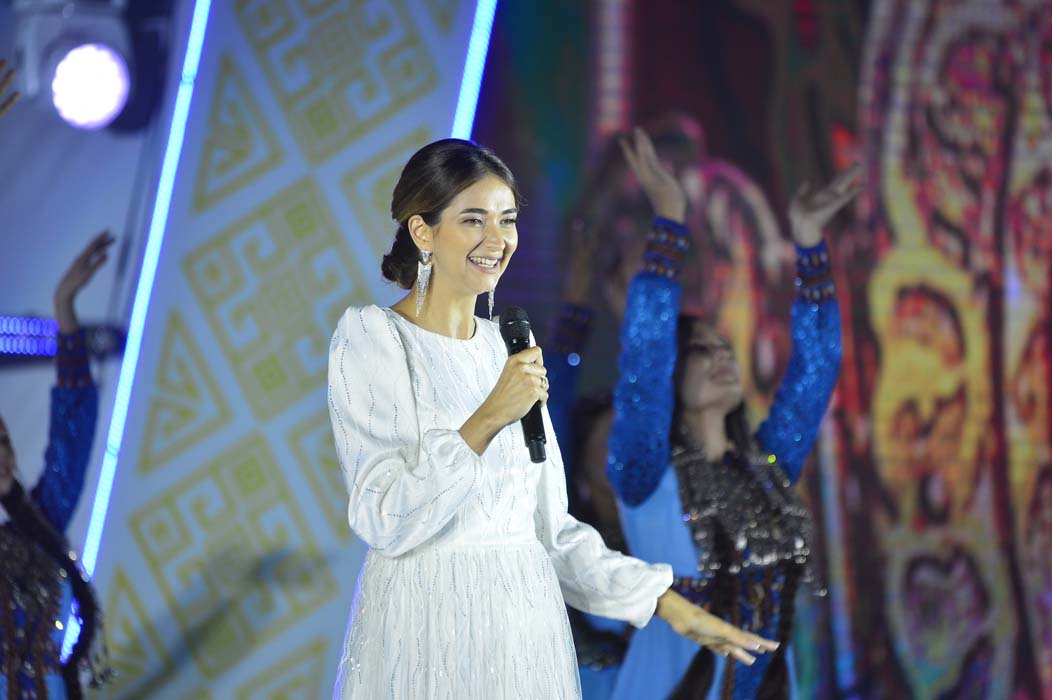 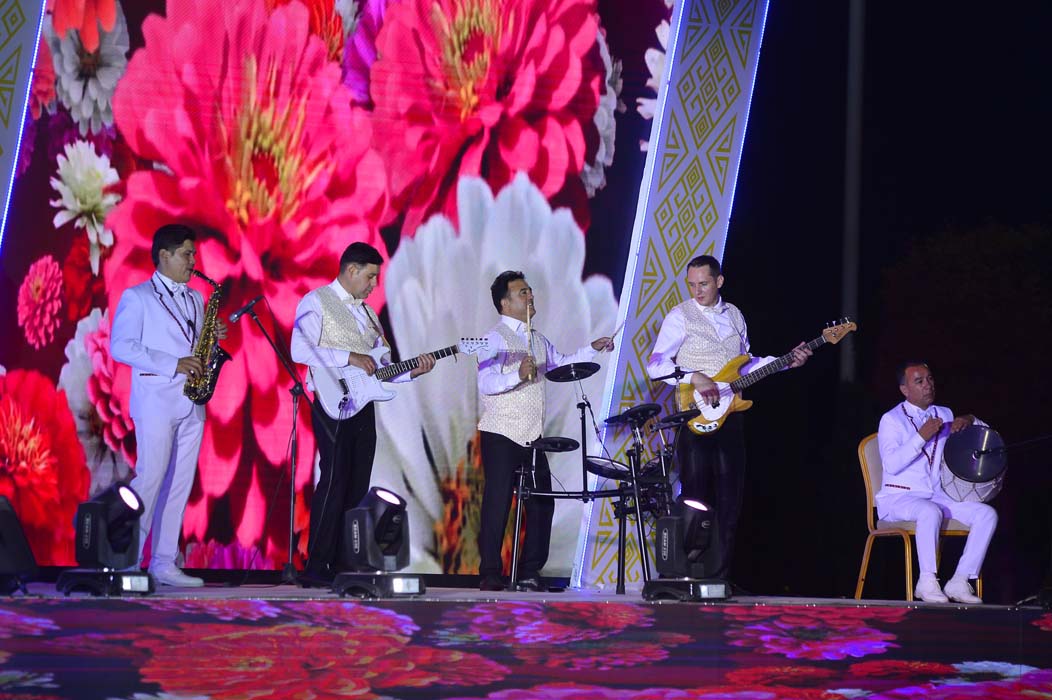 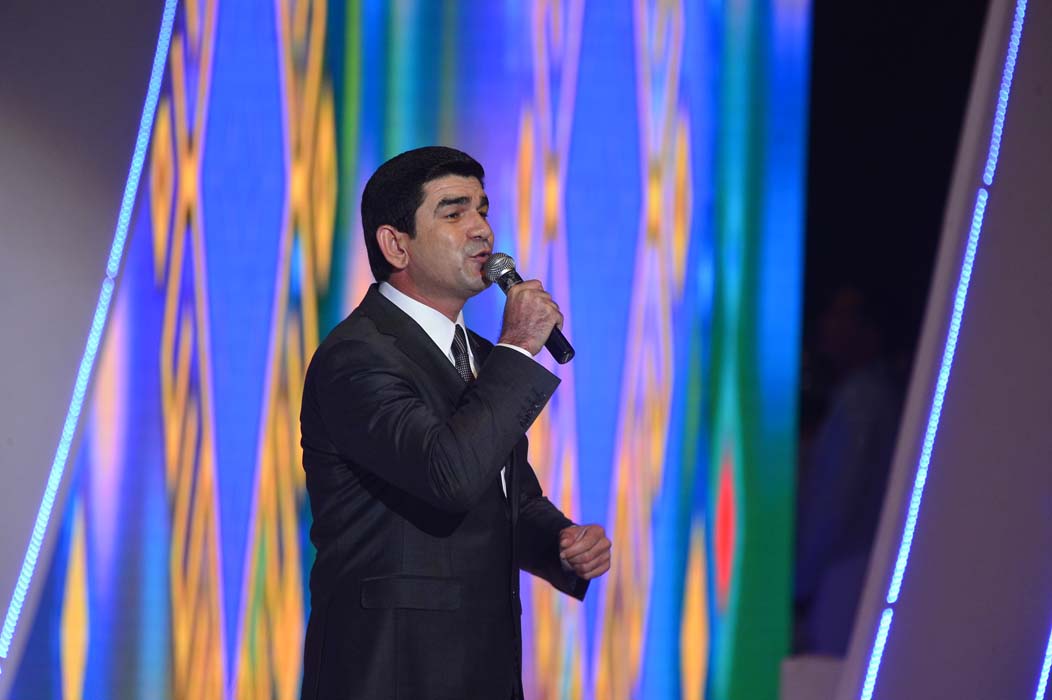 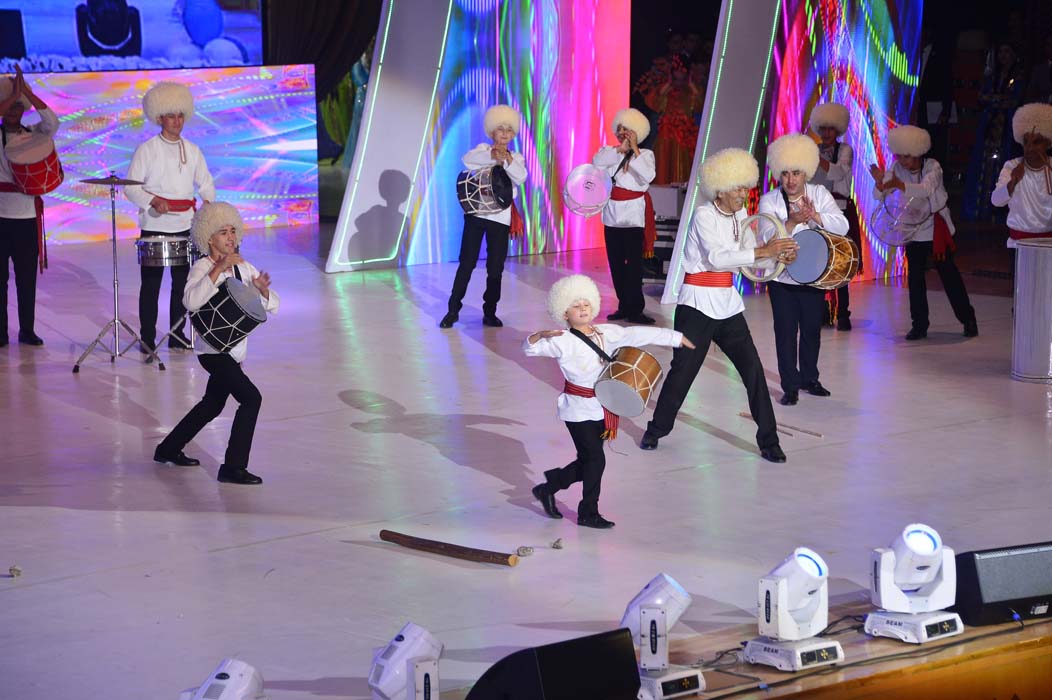 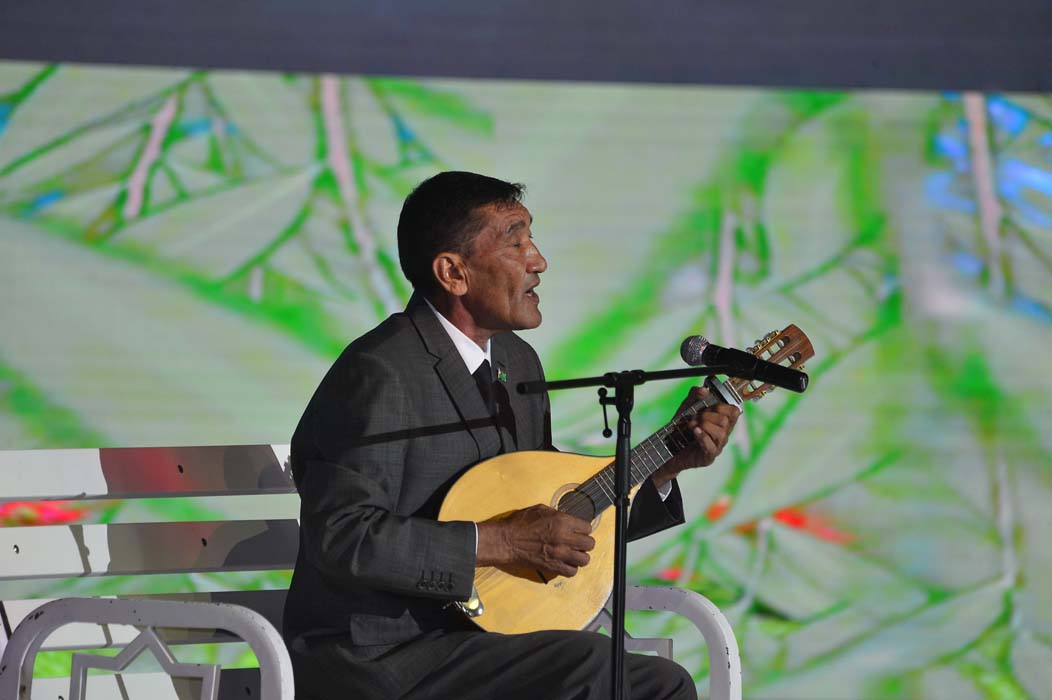 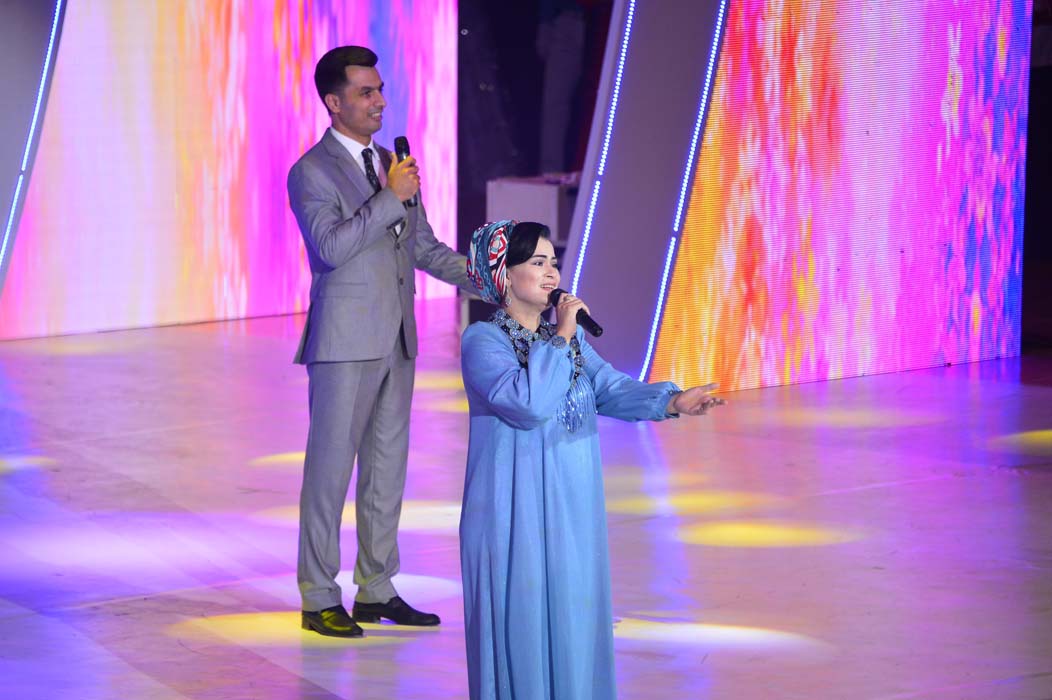 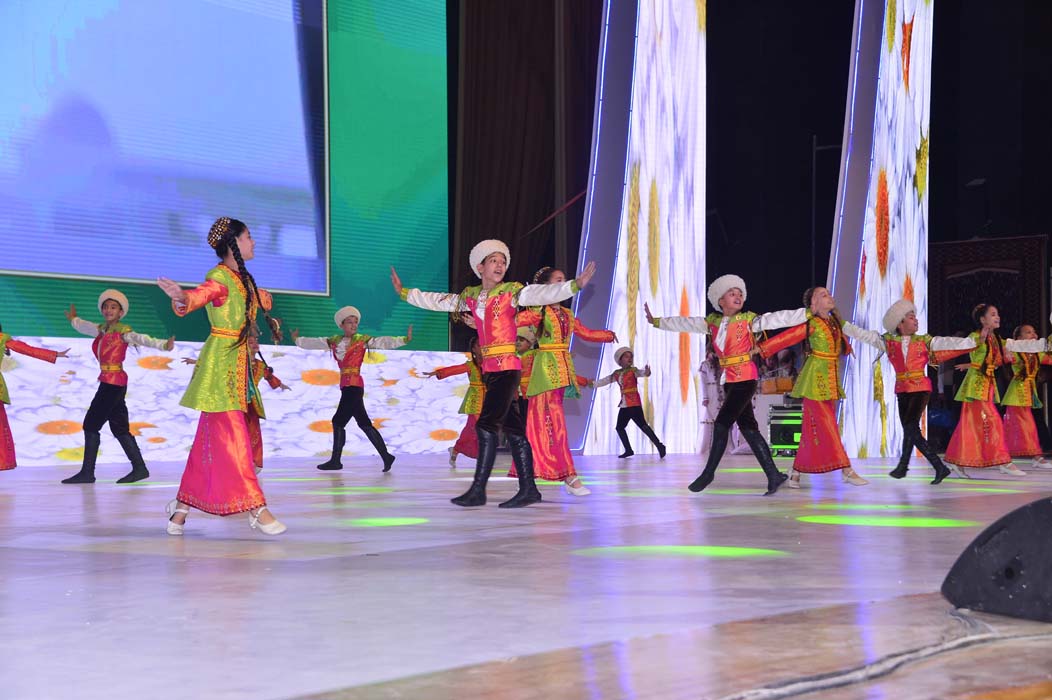 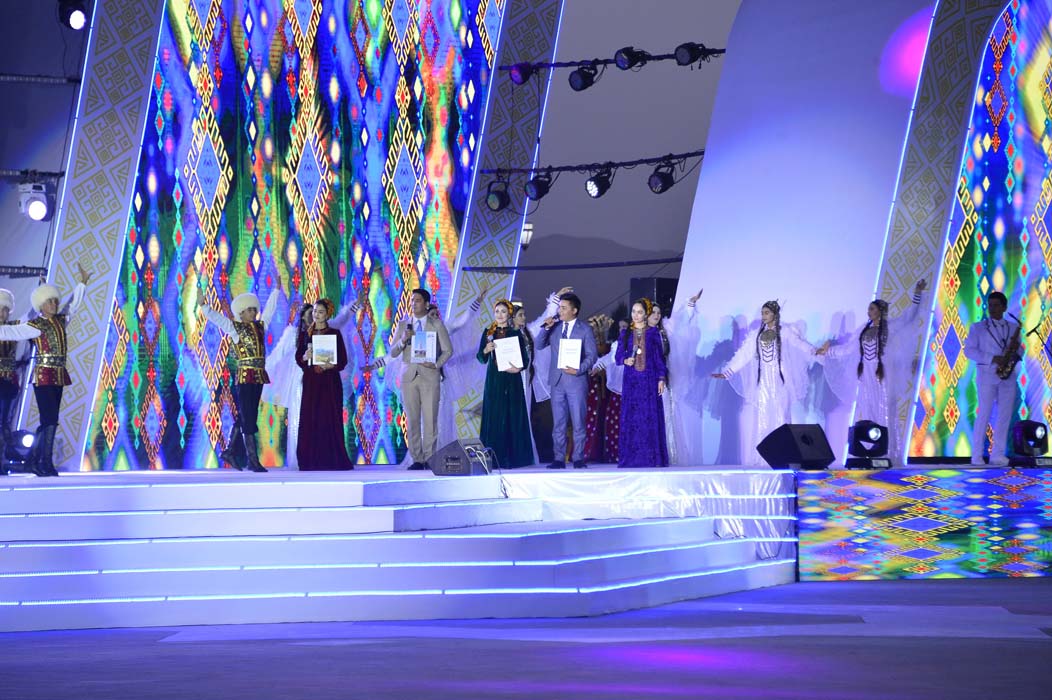 The State concert of masters of arts, dedicated to the 31st anniversary of the country's independence, was held today in the building “Türkmeniň ak öýi” in the Ak Bugday etrap of the Akhal velayat.

The living heritage of the national culture of the Turkmen people is the idea of a festive event that unfolded today in the picturesque Akhal valley, in a place called “Nowruz ýaýlasy”, which more than once became the center of large-scale celebrations, with their ethnic touches.

And today, an impromptu Turkmen village is located in Nowruz ýaýlasy. The guests who arrived here became participants in inexhaustible and invaluable national traditions, visited yurts, watched the work of masters of arts and crafts.

The program of the festival, as it has long been established among the Turkmens, included traditional folk fun games and rituals that give a unique flavor and contribute to the creation of an atmosphere of universal joy and fun.

At the white yurts, children demonstrated their dexterity in outdoor national games, young people flew up on high swings, young palvans measured their strength not far away. Local needlewomen demonstrated their skills in making the bride's dowry. A bright ethnographic picture of folk life was complemented by a caravan of nomadic camels and an abundance of vegetables and gourds grown on Turkmen soil. From the smoking cauldrons, the aromas of freshly prepared national dishes were carried, which were treated to guests.

A bright impression was made by the performance of the group of national equestrian games known far beyond the borders of the country, which presented an original composition for the ancient dance kushtdepdi.

Theatrical performances by “Galkynyş”, sports events, ritual songs passed down from generation to generation, bakhshi performances and much more - everything was intertwined in one colorful wreath, giving the participants of the celebration a great mood.

On both sides of the road leading to the Türkmeniň ak öýi building, white yurts were also erected, where exhibits are presented that demonstrate the life of the Turkmen people, the richness and inexhaustibility of the spring of national culture and art.

There is also a concert venue, and pavilions have been set up near the building for holding a sadaka, where participants in festive events can taste tea, soft drinks and treat themselves to national sweets.

High spiritual uplift and emotional mood reign under the arches of the magnificent hall "Türkmeniň ak öýi", where numerous spectators gathered. Among them are members of the Government, heads and representatives of the Milli Gengesh, ministries and departments, military and law enforcement agencies, public organizations, heads of diplomatic missions and international organizations accredited in Turkmenistan, respected elders, representatives of scientific and creative intelligentsia, universities, media, student youth.

The concert program was opened by the inspired patriotic song "Garaşsyz, Bitarap bagtyýar Watan!" performed by soloists, the choir of the Turkmen National Conservatory named after Maya Kuliyeva and the children's choir "Güneş", glorifying the sovereign Motherland - the country of peace and creation.

The concert continued with the premiere of songs dedicated to President Serdar Berdimuhamedov. The performances of soloists and creative teams were accompanied by video frames reflecting the swift pace of the modern neutral Turkmen state.

The variety of genres and premiere performances embodies the richest potential of national art.

The performance of the young Turkmen people, the future of our independent Motherland, was received with special warmth by the audience. In the musical and choreographic composition "Joş, ýüregim, joş", filled with the sincerity of children's creativity, the winners of the annual competition "Garaşsyzlygyň merjen däneleri", the young violinists of the ensemble "Mukam" and the popular dance groups "Ruhubelent çagalar" and "Şowhun" shone with talents.

The concert continued with solo performances by famous musicians and pop singers, folklore ensembles and dance groups. Along with venerable performers, young vocalists and musicians, who are starting their career in art, demonstrated their talents, many of whom, on the eve of the Independence Day of the country, became winners of creative reviews held as part of the competition for the award of the President of Turkmenistan "Türkmeniň Altyn asyry".

The best examples of national and foreign song and music classics and modern works sounded from the stage, original vocal and choreographic compositions glorifying the Motherland, its beauty and power were performed. Ethnographic performances organically fit into the festive program, recreating the original customs and traditions of the Turkmen people carried through the centuries.

The national pop artists also performed wonderful songs loved by generations of Turkmen dancers. Over the years, they have not lost their enchanting warmth and freshness.

The hall applauded the wonderful performance of the drummers, who masterfully performed the festive musical composition “Oguzlar ýurdunda toýdur dabara”, dedicated to the beloved Motherland, the dynamic pace of development of which is comparable to the swiftness of the beautiful Akhal-Teke horses.

The song "Bagt nury" loved by the Turkmen people, the words and music of which were created by the Hero-Arkadag, became a real gift for the audience.

The warmth of hearts, sincerity and talent of the artists found a warm response from the audience, and the use of modern audiovisual technologies gave the festive action a special brightness and originality, turning each performance into a kind of mini-performance.

One of these performances was the composition "Bir suprada taýýar kylyndy aşlar". Performed by a team of bakhshi musicians and well-known choreographic groups, it was full of details reflecting the wonderful national traditions and customs, hospitality, friendliness and tolerance of our peacemaker people.

The powerful final chord of the celebration was the inspirational song "Garaşsyzlyk bagty Sizde, Arkadagly Serdarymyz!", which was performed by all participants of the concert as an ode to the independence of the country, the happy era of the Fatherland, striving for a brighter future under the leadership of the President of Turkmenistan Serdar Berdimuhamedov.

In the evening, the festive action took place on the square in front of the Türkmeniň ak öýi building, where popular pop singers, musicians, choreographic and ethnographic groups performed for numerous spectators in a large concert program.

Concerts in the place "Nowruz ýaýlasy" in the Ak Bugday etrap of the Akhal velayat will continue on these holidays.