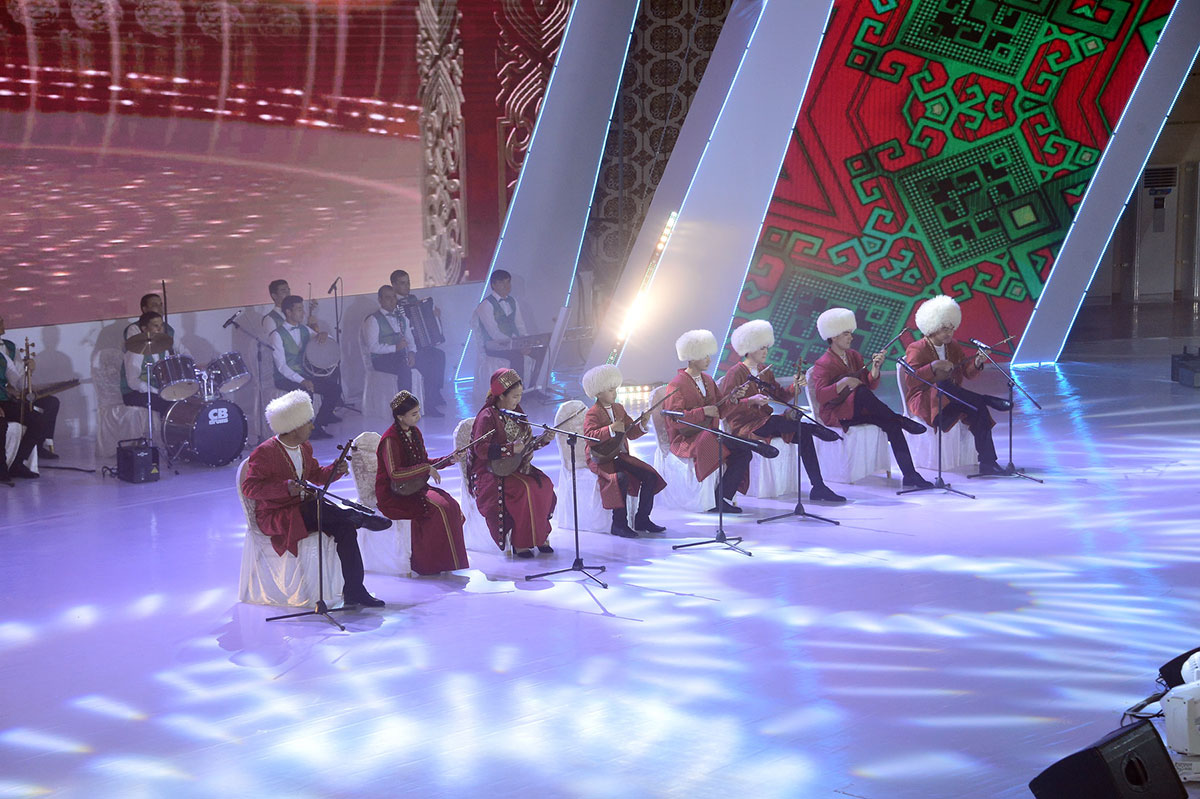 Among the main events of the third day are a field seminar "New principles for the careful preservation of historical and cultural monuments and directions for the development of tourism" and an international scientific and methodological meeting online, a thematic meeting of museum specialists "The main directions for the development of museum business in the era of the Renaissance of the new era of a powerful state ”and methodological courses on studying the experience of improving the work of house-museums, an exhibition of artists, sculptors and photographers, as well as a concert with the participation of masters of art.

In the first half of the day, a field seminar "New principles for the careful preservation of historical and cultural monuments and directions for the development of tourism" was organized for the participants of a large-scale creative action in the State Historical and Cultural Reserve "Ancient Merv". This complex of unique monuments is one of the most popular centers of attraction for numerous tourists from all over the world, a place of pilgrimage and at the same time a laboratory for scientific research and new discoveries.

In the morning, the delegates of the cultural forum visited the Great Gyz-gala, built of mud bricks more than a thousand years ago.

The participants of the Week of Culture got acquainted with the history of the famous monument, the finds of archaeologists presented in the museum of the reserve, with the latest scientific discoveries confirming the great value of these objects that require further research.

Also, the participants were given the opportunity to see the architectural ensemble - the mausoleum of askhabs.

Cultural events continued in the building of the Local History Museum of the Mary velayat, where an international scientific and methodological meeting was held via video link, a thematic meeting of museum specialists "The main directions of development of museum business in the era of the Renaissance of the new era of a powerful state", methodological courses on studying the experience of improving the work of houses - museums.

The group of dutarists of the Mary city children's art school No. 1 spoke for the audience.

The exposition located on the first floor is represented by graphics, paintings, ceramics of the masters of the Turkmen school of fine arts, as well as diploma works of students of the Academy of Arts. On the second floor of the museum, works of arts and crafts, national fine arts, which make up its "golden fund", are displayed.

At the international scientific and methodological meeting in a hybrid format "New principles for the careful preservation of historical and cultural monuments and directions for the development of tourism", reports were heard on the further study and popularization of the national heritage, on the results of archaeological excavations conducted in different regions of the country, and scientific research that reveals pages of ancient history and culture of the Turkmen people.

Foreign participants who joined the meeting via digital communication - representatives of the scientific community of the Russian Federation, Kazakhstan, Uzbekistan, Kyrgyzstan, China - shared their vision of the prospects for the development of cultural tourism in Turkmenistan.

The meeting also discussed issues of further development of the tourism industry of Turkmenistan, through which the Great Silk Road ran in ancient times.

During the videoconference, various approaches to the development of the tourism industry were discussed, and the huge potential of historical, cultural, ecological, and health tourism in our country was presented.

Today, within the framework of cultural events in the Murgab etrap of the Mary velayat, films of the Oguzkhan Association "Türkmenfilm" were shown. The works of filmmakers “Owaz” and “Binýat” tell about the careful attitude of the Turkmen people to their customs and traditions, about deep love for the Motherland, wisdom and nobility.

In addition, excursions to the sights of the city of Mary were organized for the guests.

In continuation of the large-scale action of the Week of Culture in the hospital of internal diseases of the city of Mary, a meeting of medical workers of the Mary velayat with a doctor of the medical and production center of the State Medical University named after Myrat Garryev, a candidate of medical sciences, Honorary Elder of Turkmenistan G. Ataev and the head of the department of the Turkmen State University named after Magtymguly A. Burunov.

The third day of the creative forum ended with a concert, where soloists and creative teams from the Balkan and Dashoguz velayats demonstrated their skills. Folk and modern melodies and songs sounded, incendiary dances were performed. The inspiration and talent of the artists, who glorified their native land, the people, its ideological inspirer - Arkadagly Serdar in their performances, were highly appreciated by the audience, who greeted the performers with thunderous applause.