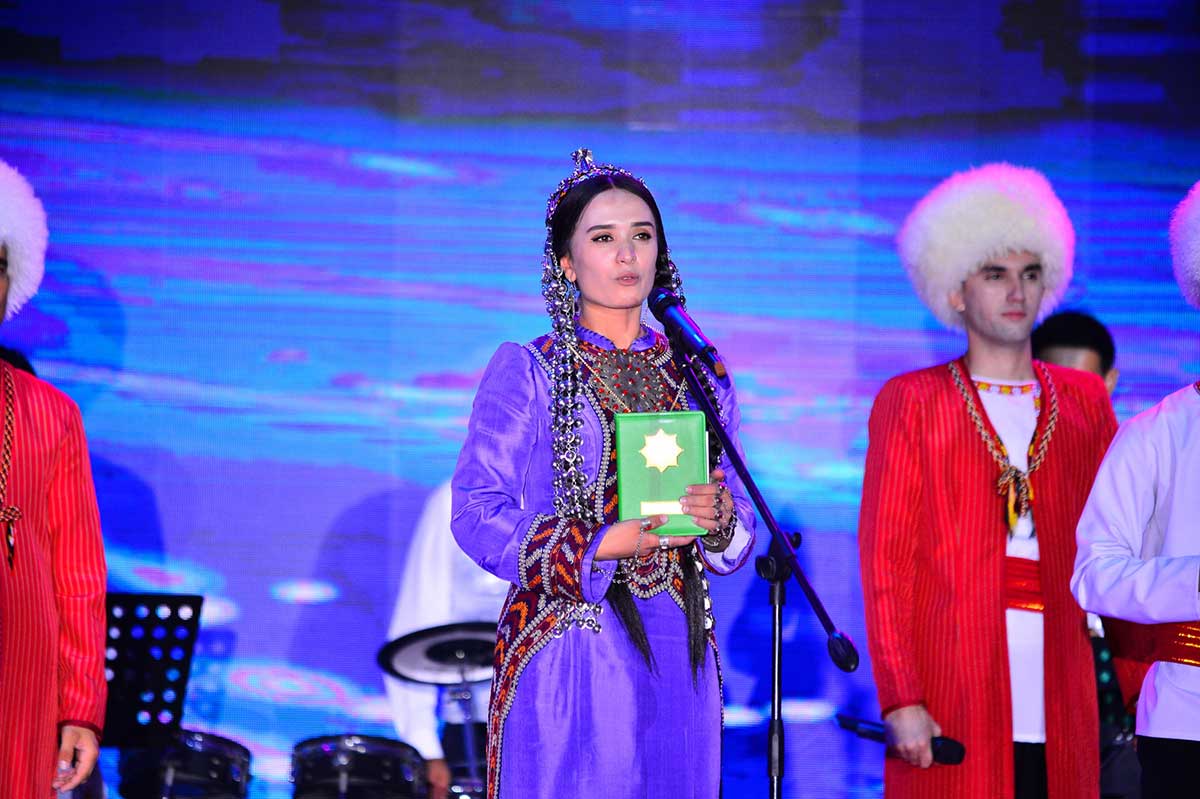 Today in the song-musical center “Ashgabat” of our capital took place the final round of TV contest of the amateur performers «Ýaňlan, Diýarym!», which is traditionally is held in honor of the main holiday of our country – Independence day.

Every year this creative contest is carried out within the framework of the competition announced by the President of Turkmenistan competition «Türkmeniň Altyn asyry». The organizers of the festival of the brilliant and versatile talents of Turkmen youth were the Ministry of Culture, The State Committee of Turkmenistan for Television, Radio Broadcasting and Cinematography, khyakimliks of velayats and Ashgabat city.

With great attention and inspiration the audience listened to a welcome address of the President Gurbanguly Berdimuhamedov to the participants of the final round of TV contest «Ýaňlan, Diýarym!».

The Head of Turkmenistan expressed confidence that the contestants will devote their best skills and talent for further development of culture and art, and became the worthy successors to the traditions of the tutor musicians.

For the most talented performers, who successfully passed all preliminary contest stages beginning from the etrap, velayat rounts up to the final round in capital city, this nationwide festival became a significant start on their way to the world of high music art.

And today in the final gala concert «Ýaňlan, Diýarym!» the spiritual songs of the young gifts from all velayats of our country and from capital were heard, among them – the soloists of various creative collectives, students of the higher educational institutions, employees of the cultural establishments and other fields.

In the open-air amphitheater of the song-musical center “Ashgabat” of our capital there were heard the spiritual and excited folk songs and pop compositions about our Homeland, grandiose achievements of the new historic epoch, beauty of native land. The performers tried to give a new tone to songs created both by the eminent Turkmen composers to words of the classic poets, and the modern composers, where harmonized the modern rhythms and old melodies.

«Aşgabat» song devoted to Turkmen capital jointly sung by the contest participants gave a special intonation to the festive canvas of gala concert. The content of continuity of the best traditions of national art was evidenced in the concerted numbers.

Together with the finalists of today’s contest the winners of the former festivals shined on stage. For many of them «Ýaňlan, Diýarym!» became a springboard to the colorful creative life, opened a way to big stage. In their joint performance a song «Arkadagym bilen barýarys öňe» was heard.

The final accord of gala concert became a song «Siz zamanaň mähribany, Arkadag!» sung by all participants, and devoted to the leader of the nation Gurbanguly Berdimuhamedov, on whose initiative and under whose leadership the grandiose reformations are carried out in our country; and to our native Fatherland, which celebrates the 30th anniversary of the sovereign development with new achievements and great success in different spheres.

Thus, it was announced the names of the winners who became the holders of special diplomas and premium on behalf of the President of Turkmenistan. The award recipients expressed profound gratitude to the leader of the nation for the creation of all conditions for the comprehensive creative activity.

No one participant of this grand musical holiday was passed over – everyone obtained the special encouragement awards on behalf of the President of Turkmenistan.

Responding to the care, the young amateur artists in their grateful address to the head of the state expressed their sincere gratitude for the comprehensive support of the creative talents of the country youth and assurance that they will exert every effort, talent and inspiration for further enrichment and popularization of Turkmen art in the world.

Last news
Politics
The President of Turkmenistan congratulated the King of Jordan
Politics
President Serdar Berdimuhamedov received representatives of the US Business Community
Comments
April 2022: following the course of foreign policy initiatives of the head of state
Politics
The President of Turkmenistan held an online working meeting
Politics
Enhancement of an inter-parliamentary dialogue between Turkmenistan and the Republic of Tatarstan
Economy
Aviation kerosene is in demand among foreign businessmen