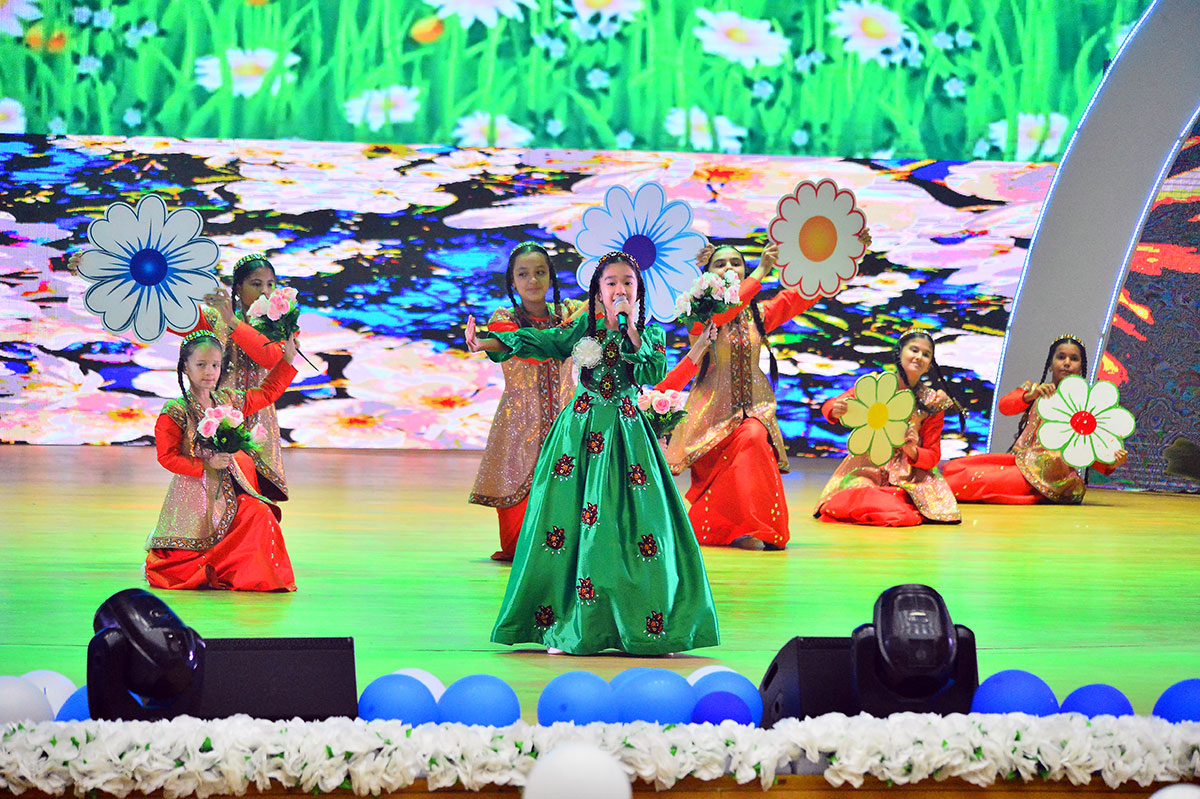 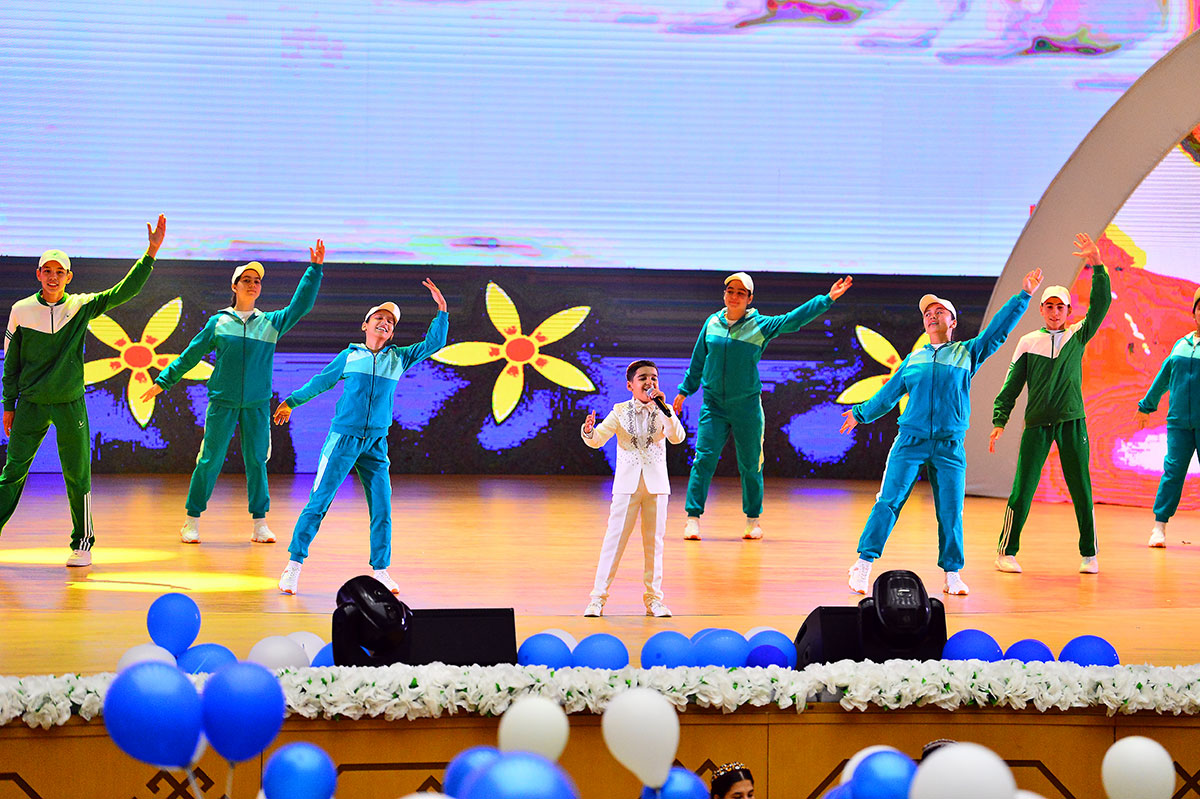 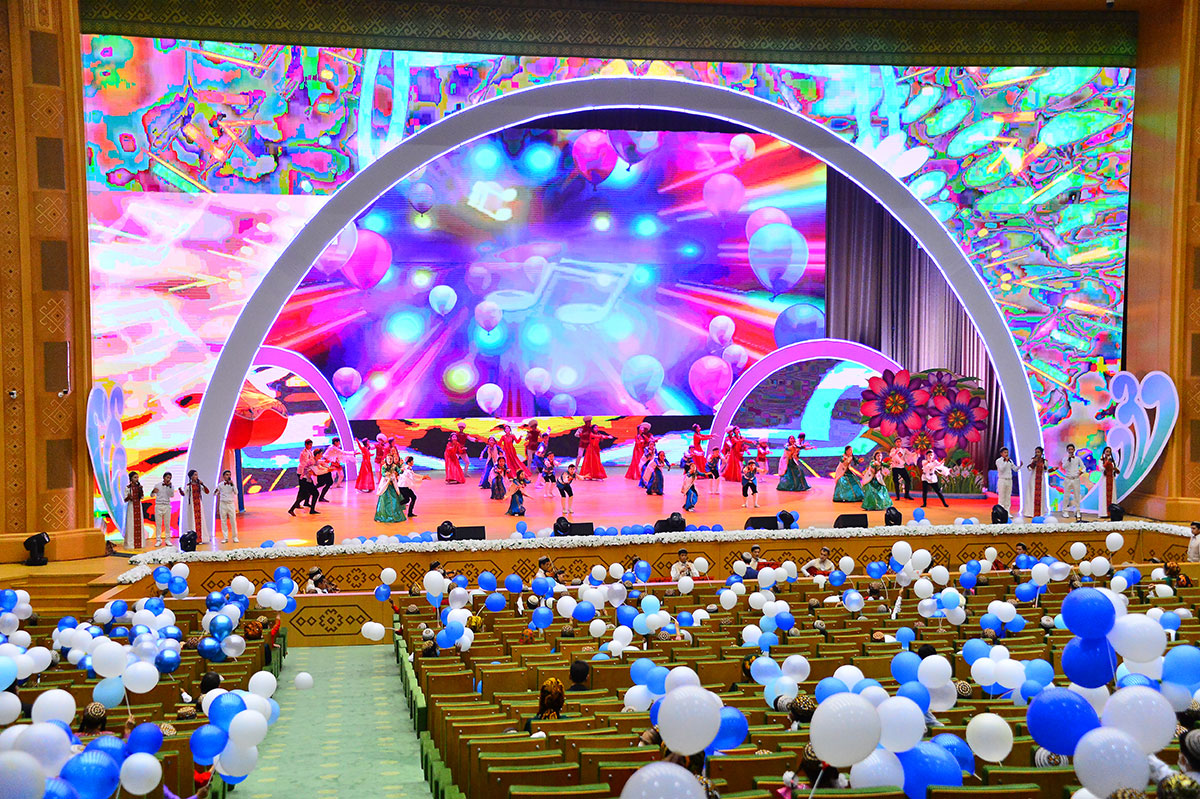 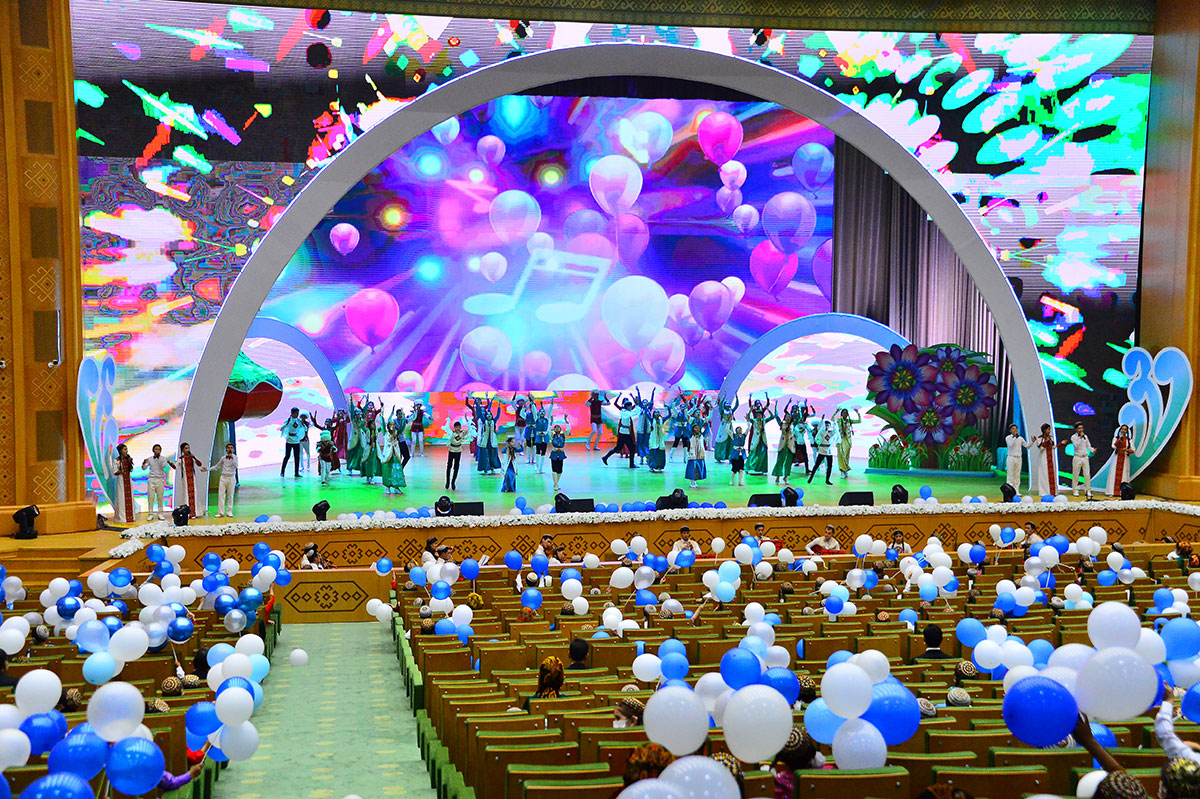 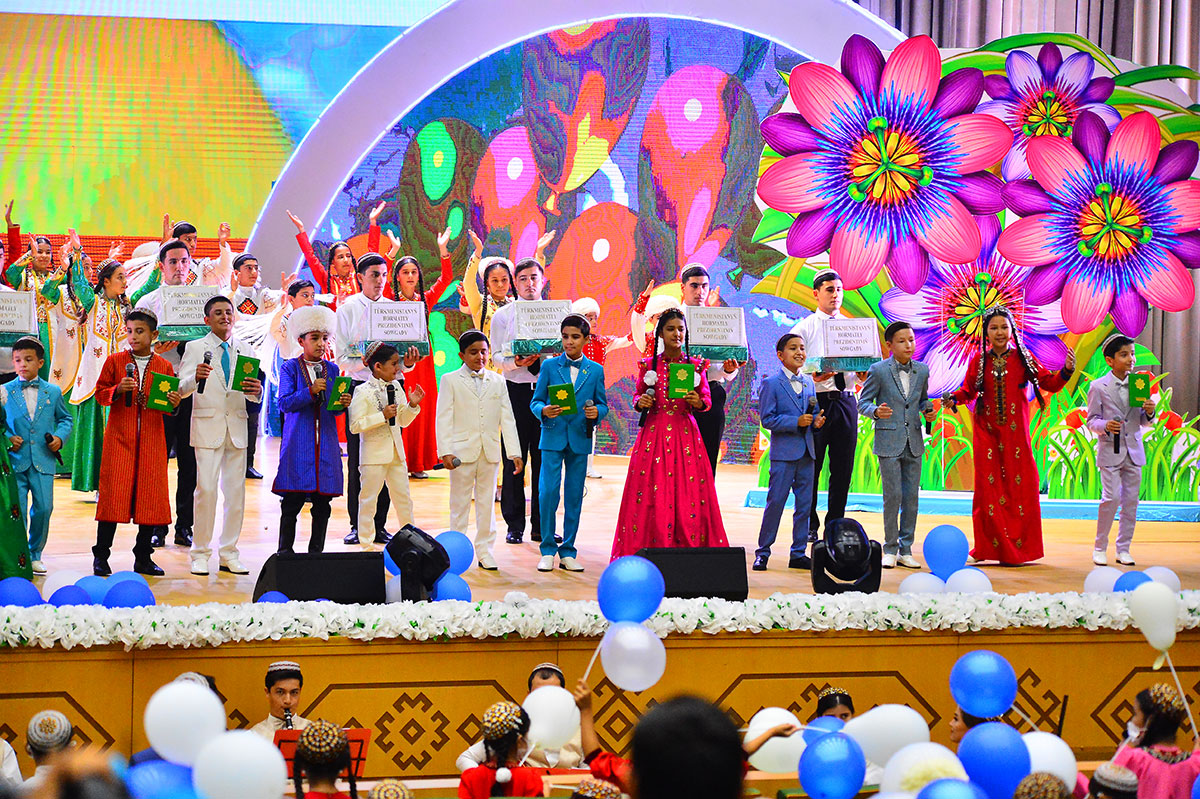 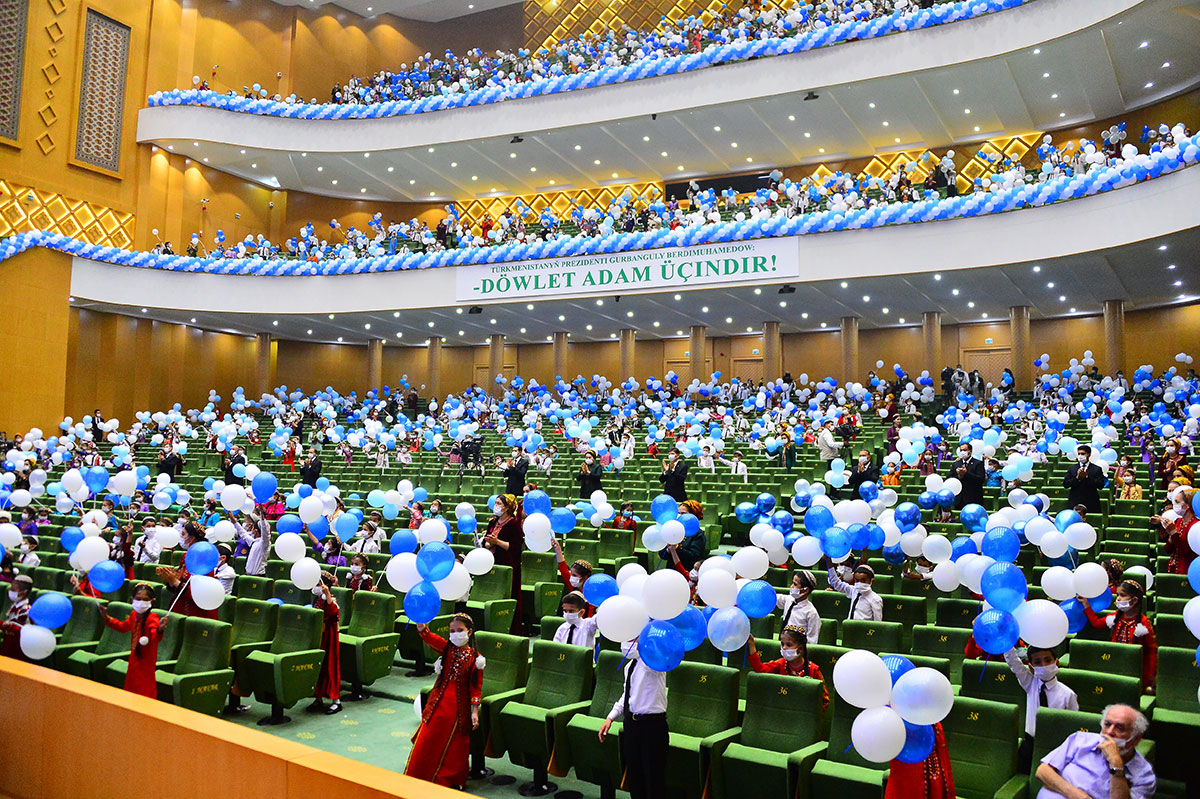 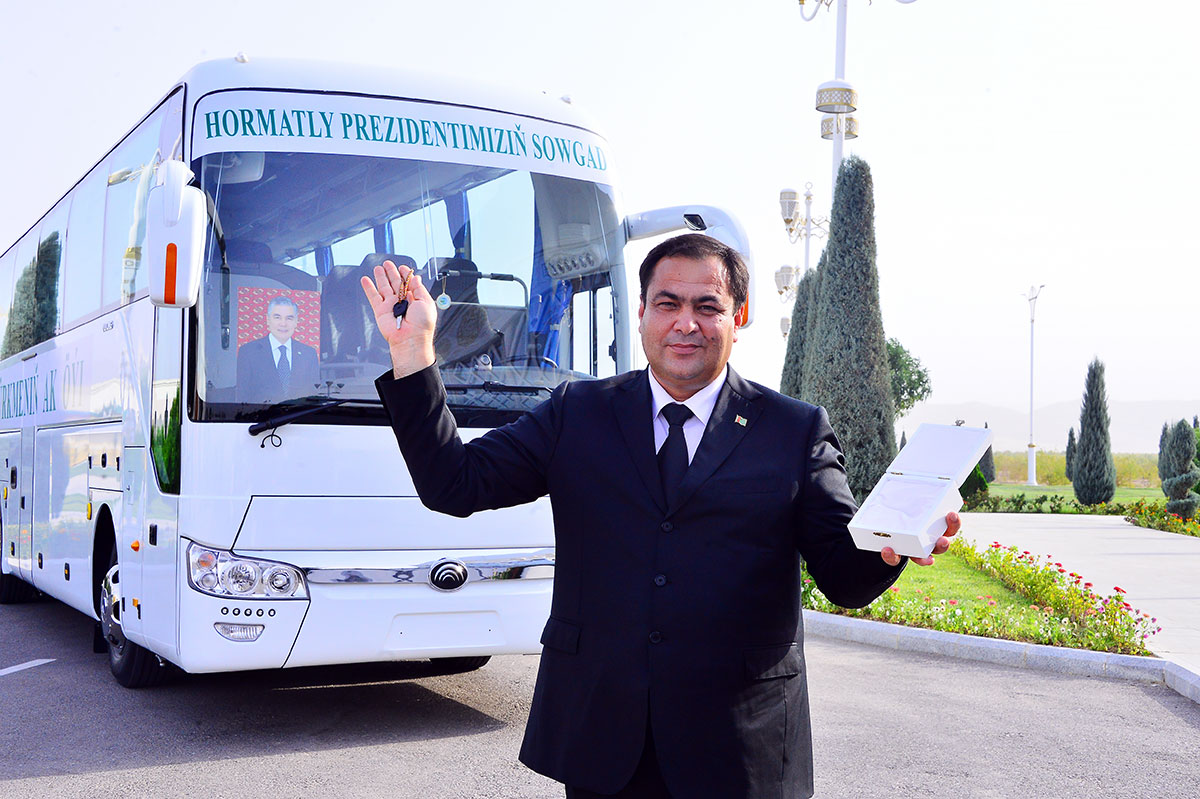 The gala concert of participants of the final round of song and musical competition of young talents "Garaşsyzlygyň merjen däneleri", devoted to the 30th to anniversary of independence of Turkmenistan, took place in the valley today Nowruz where the building in the form of a huge yurt - "Türkmeniň ak öýi" majestically towers.

The special patriotic spirit of the opening ceremony of children's creative marathon was given by the words of greeting of the President of Turkmenistan to young actors read by deputy chairman of the Cabinet S. Berdimuhamedov.

In the Address of the head of state the great importance of the competition «Garaşsyzlygyň merjen däneleri " which cultivates love to art in children's souls is emphasized, reveals talents. "Your fine songs, unusually beautiful dances are your great love to native Fatherland, the people. It is a high example of devotion to the Homeland, the people, in your songs - a source of inspiration and happiness. Your magic melodies are the fine art broadcasting to the world about our independence, positive neutrality, the creativity you for the whole world glorify the Fatherland and the people", - is emphasized in the message of the leader of the nation Gurbanguly Berdimuhamedov.

The festival of children's talents which is annually held within competition for the award of the President of Turkmenistan "Türkmeniň Altyn asyry" promotes identification and support of creative abilities of younger generation, development of amateurs and professional art in all variety of its types and genres, continuity of traditions of national musical culture. This competition creates a wide field for experiments and initiatives, courageous searches and new finds, induces children to self-expression.

Selection rounds of competition start long before the final gala concert in the cities, district, velayats, take place in some stages, defining the best.

Certain performers, dancing, song and musical collectives and ensembles of national creativity - ascending "asterisks" which in the future should increase glory of national art took part in the final competition.

The final solemn gala concert in dedication to the main holiday - the 30th anniversary of independence of the country began with «Biz Garaşsyzlygyň merjen dänesi “which is penetrating executed by all participants of the song contest. It is devoted to fatherlike care of the head of state of younger generation, for harmonious and which all-round development in Turkmenistan all conditions are created. Children in the language of stage art told of happiness to live in the country where their most cherished dreams and desires come true.

Under a general applause of the auditorium names of the most talented performers who are deservedly awarded ranks of winners were declared.

On behalf of the President of Turkmenistan they were awarded valuable prizes and diplomas of winners of competition. All participants of this spectacular creative marathon became owners of the mementoes urged to serve children as a peculiar incentive for participation in further creative competitions, achievement of the treasured purpose.

Participants of the children's festival " Garaşsyzlygyň merjen däneleri " accepted the thankful address to the President Gurbanguly Berdimuhamedov in which expressed sincere gratitude for continued fatherlike care of happy life of young generation, having assured the leader of the nation that will diligent study, be engaged in creativity, to develop the talents, to make a worthy contribution to development of Fatherland.

At the end of the event deputy chairman of the Cabinet S. Berdimuhamedov on behalf of the President of the country donated "Türkmeniň to ak öýi" in the Akhal velayat the new bus.